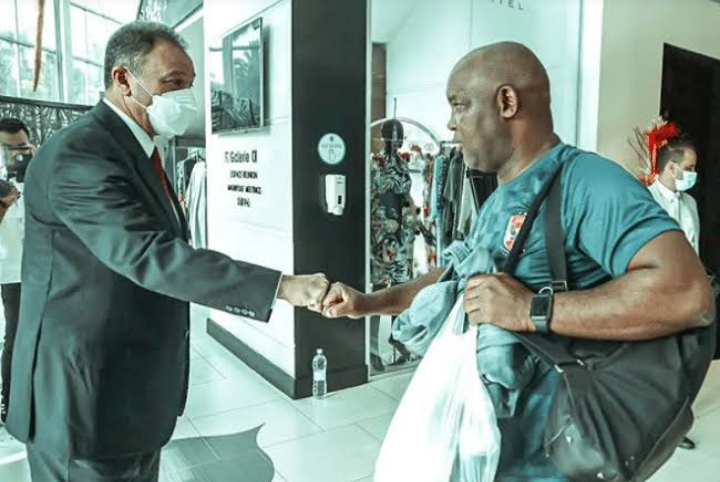 Pitso Mosimane left the club due to fatigue, according to Mahmoud El-Khatib, president of Al Ahly. The South African was both mentally and physically exhausted, he added.

Mosimane departed Al Ahly in the weeks following Al Ahly's defeat to Wydad Athletic Club in the CAF Champions League final, although many supporters and even club members were taken aback by his decision.

Mosimane chose to depart in the middle of the season, despite Al Ahly's declared desire to keep him on.

For the first time ever, "Captain Bibo," who gave a one-hour press conference over the weekend, addressed Mosimane's resignation.

In a recent interview with Al Ahly TV, he stated, "We were discussing with Mosimane what the club needed for the Egyptian Premier League campaign while he was attending a training course in Morocco."

But he claimed to be exhausted both physically and mentally and couldn't play out the season.

El-Khatib also acknowledged that there was a "campaign" against "Jingles," who had received constant criticism from a number of Al Ahly legends as well as some club insiders, despite the South African coach's trophy-laden tenure in Cairo.

In his spare time, Mosimane himself travels to clubs around the African continent. He began with Royal AM in South Africa and then participated in Young African's Citizen's Week.

During his visit at Tanzanian giants Yanga, Mosimane was also asked why he is taking a sabbatical from the game and he also pointed at fatigue as the main reason for his decision.

“I was at the Stadium every day with matches every three days and I was travelling a lot,” he said.

“Now I have decided to rest and I am using my rest to participate with Young Africans SC in the Citizen’s Week.”

Pirates New Signings Is Available For Next Clash - Riveiro Confirms

A young woman sustained minor injuries when her Toyota did this. Details