According to the latest South African news on Monday, June 27, the 21 victims of the Enyobeni bar were all 17 or younger. 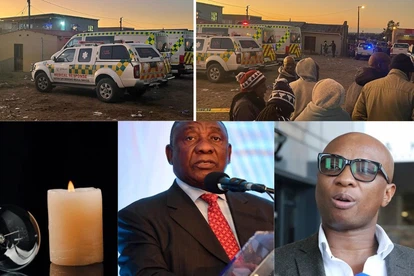 Eskom has blamed the continued use of Stage 4 load shedding on 'illegal and unprotected' labor action at some of its power plants.

DEATHS AT ENYOBENI TAVERN: ALL WERE MINORS, AGE OF YOUNGEST VICTIM CONFIRMED

It's not becoming any easier to take. Police have announced that the death toll from the Enyobeni pub has risen to 21, with all of the casualties officially classified as'minors' - those aged 17 or younger.

A 13-year-old boy is among the dead. A large number of underage drinkers are believed to have made their way to Enyobeni in East London to partake in post-exam celebrations. It's beyond our comprehension why these children believed this would be an appropriate site.

In this region of East London, the raw outpouring of grief is palpable. A location that could barely hold a few hundred people was swamped by THOUSANDS of partygoers. Teenagers flooded into an adults-only restaurant by the dozen.

DEATHS IN AN EAST LONDON TAVERN: RAMAPHOSA 'EXPECTS THE LAW TO TAKE ITS COURSE'

President Cyril Ramaphosa is the latest to speak out in response to the deaths of at least 20 children discovered inside an East London bar.

Ramaphosa, who is in Germany for the G7 Summit, has offered his condolences to the relatives of the victims of the tragedy.

"While the President awaits further details on the event, his thoughts are with the families who have lost children as well as those who are awaiting confirmation of how their children may have been affected."

For 2022, SARS has made revisions to its auto-assessment rules. The improvements were introduced to make the process of submitting income tax returns easier for taxpayers.

Under the new rules, SARS will send taxpayers an initial estimated assessment to review. Data from third parties, such as banks and medical aids, will be used to create the statement.

Prepare yourself! Due to protests at some of its power stations, Eskom has announced that stage 4 load shedding will continue at least until Wednesday.

After negotiations broke down, the beleaguered power utility imposed stage 4 load shedding on Friday as a result of a strike by employees over pay. According to Eskom, the labor strike has caused delays in carrying out planned maintenance and repairs.

"Furthermore, in a number of power plants, the whole workforce has not reported for duty." As a result, unplanned generation losses have not been reduced as intended, forcing Eskom to maintain cautious steps to save generation capacity and protect plant from damage.

Zizi Kodwa is the latest high-profile ANC member to be implicated in the Farmgate scandal, when Namibian officials allegedly accused him of keeping quiet about the robbery at President Ramaphosa's Phala Phala property in 2020.

Burglars uncovered a massive stash of US currency worth up to $4 million at the home. The money was then spent rapidly so that it couldn't be traced back. However, one person was apprehended by police over the border.

Here you may find weather forecasts for all nine provinces.

View our live traffic updates here to stay one step ahead of the traffic.