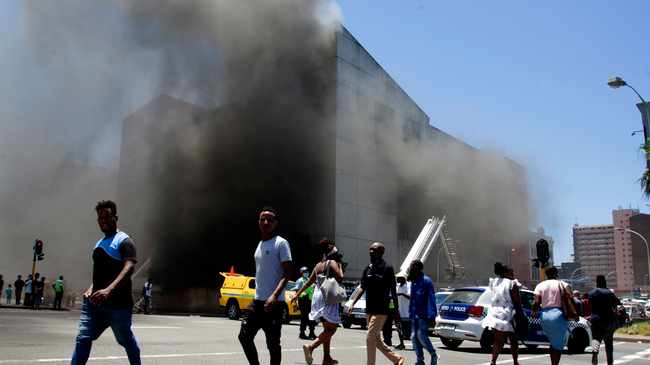 Durban — As a precaution, businesses near Durban's China Emporium have been evacuated, according to eThekwini Municipality on Friday.

Lindiwe Khuzwayo, the city's head of communication, said the city will continue to monitor the situation at China Emporium to guarantee the public's safety after a fire devastated the structure.

She stated that the building was condemned as a result of inspections by structural engineers hired by the building owners at the request of eThekwini Municipality.

Businesses in the precinct have been evacuated, and several traffic lanes remain closed as the building's structural integrity is suspected to be endangered.

Due to the lane restrictions, there is a lot of traffic on Brook Street and Dr. Pixley ka Seme Street near the building. " Khuzwayo explained.

Motorists are encouraged to be cautious when driving in the area.

As a precaution, the city's fire and emergency services will continue to maintain a presence around the structure.

The general public is asked to avoid the area around the building if possible and to take other routes.

If there are any new developments, the public will be notified.

The structure is set to be destroyed, according to IOL on Thursday.

According to Nkulumo Dube, Divisional Commander of the eThekwini Fire Department, a meeting has been called between city structural experts and insurance assessors to determine the best course of action.

He went on to say that the structure would be dismantled.

"Everyone, including the owners, has been advised that no one is permitted to enter the premises," he added.

A fire broke out on the grounds last week. At least 15 individuals were rescued from the structure. There were no reported injuries.

Musa Khawula says Cassper Does not own Billiato. Read

Is this the NEW Kaizer Chiefs away jersey?