An awful accident on N2

By Bright (self media writer) | 2 months ago 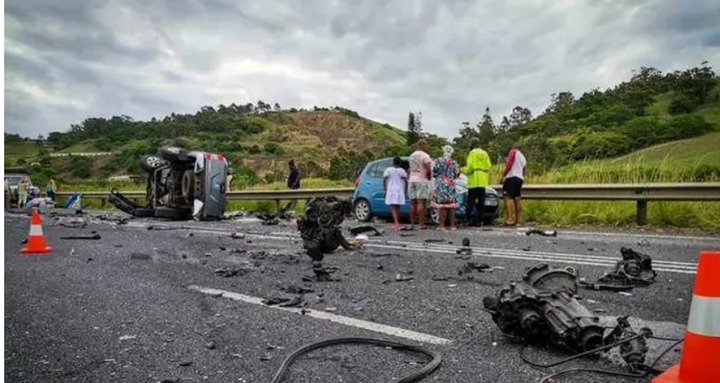 Colonel Thembeka Mbele, a police spokesman, confirmed that four vehicles were involved in a collision on the N2 near the Umtentweni Toll Plaza on Sunday about 4.30 p.m.

"Five people between the ages of 40 and 50 passed away at the scene," Mbele said.

"At least seven persons were injured and brought to a nearby medical clinic."

According to Mbele, one of the automobiles attempted to overpower and smashed into an incoming vehicle, causing two vehicles to collide and one to tumble.

According to Kwanele Ncalane of the KZN Department of Transport, the accident involved three vehicles: a VW Golf, a Toyota Condor, and a Nissan Navara.

Ncalane stated that the division would investigate the cause of the accident, that their teams had arrived at the scene and had begun the preliminary investigation, and that they expect the report to be completed soon.

"We're also looking into the potential outcomes of physically inspecting all of the vehicles and questioning the drivers, given that there are credible claims that one of the drivers was under the influence of alcohol at the time of the accident." Nonetheless, that is now unsubstantiated, but it will be crucial for the examination," Ncalane said.

According to him, the street was closed and traffic was rerouted to the R102.

When KZPA arrived on the site, they discovered four vehicles had been engaged, according to KZPA.

When paramedics arrived on the site, they discovered three patients with basic wounds, according to the emergency vehicle administration. Two individuals had actual wounds, while three others had minor wounds.

The victims were treated on the spot before being sent to an emergency center for further treatment.

"Unfortunately, five patients had sustained mortal wounds and had submitted to their wounds when crisis administrations arrived," according to KZPA.

" Reward the vaccinated first, and the unvaccinated will be eager to vaccinate "