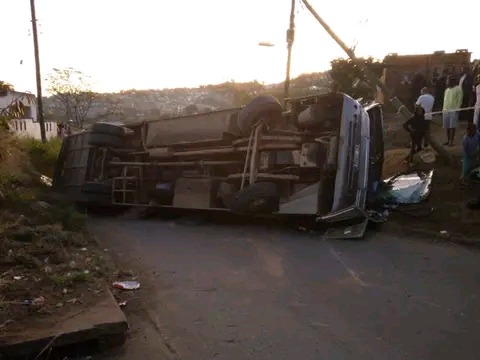 Sad news as five people lost their lives in a bus accident that have took place in KwaZulu Natal on Sunday the 26th of July 2022.

According to the source after a delivery bus that have overturned and five sadly died in a scene. The bus was reported coming from the funeral in the northern part of KZN.

Robert Mckenzie who is a spokesperson from KwaZulu Natal Emergency Medical Services said the crash happened at the N3 southbound cariageway near the Hammersdale township.

Mckenzie confirmed that five people have tragedy sustain fatal injuries and many emergency services arrived at the scene after they were called to the scene that was also include the emergency services that he is representing. He also said that many were serious injured and they were treated in the scene and rushed to nearby hospitals for further treatment.

Members of the public were reported to be also a very good assistance during the accident as the chaos was created , RUSA Members were also available in the scene.

Remember The Community That Captured A Lion & Ate It, They Have Struck Again

The Devil is Trying to Bring You Down if You See These 5 Signs.

Zama-zamas Try their Luck, Built Another Structure in Braamfischer and Police Brought Them Down

'See What Rulani Said About The New Sundowns' Goal Machine.