One of the most dangerous jobs one can ever think of accepting in this country has to be the cash transporting job, people get killed every now and then when criminals attack the cash vans targeting to get cash, they sometimes resort in shooting whoever is trying to stop them from their mission and in that case it happens to be the security officials of the particular company, they are always on the firing line since when these criminals come for money, they have no mercy at all, they would stop at nothing and would not be stopped by anyone. 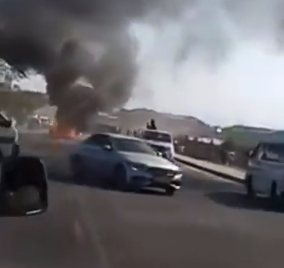 A few days ago, two security officials lost their lives after they were gunned down during a Cash In Transit heist at Duthuni in Limpopo, this comes after they were confronted by a heavily armed gang that wanted to take the cash, two of them died with one dying at the hospital a little later after the incident.

Reports of yet another heist have emerged on social media through a video, it is reported that the CIT happened at Whiteriver on the Numbi Road in Mpumalanga on Friday morning, several gun shots were fired after the thugs crashed on to the cash van and bombed it.

On the video, the person who was filming could not stand the sound of gun shots and had to duck and dive when hearing the sound of the shots that were being fired a few meters from where they were, they were travelling in a taxi and when seeing the fire, one of the passengers decided to film the incident, within a few seconds, gun shots started and the person decided to hide, probably between the seats. 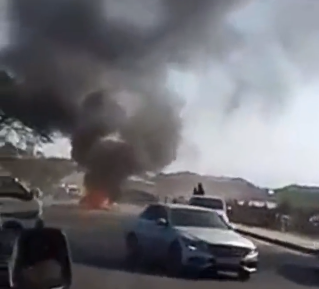 What is visible on the video is the fire which looks like emanated from the bombing of the cash van as they always do when they attack a cash can, no reports of fatalities or casualties have been reported yet, it is also not yet clear if the criminals managed to get ahold of the money.