By Fast_updates (self media writer) | 1 month ago

A white Toyota Corolla was stolen in Betania earlier today 11 August 2022, it was stolen in a house robbery where other items were stolen too: TV, phone, money and etc..

The incident may had traumatized the children in the house, due to the threats made and the guns. However the family was left unharmed and luckily the suspects stole the one car that had a tracker, the tracker was then activated after they had left.

A search team was sent to search for the vehicle the vehicle was tracked down to Betania later today and the team followed, the instructions or the signal given and the vehicle was found parked at the suspects house. 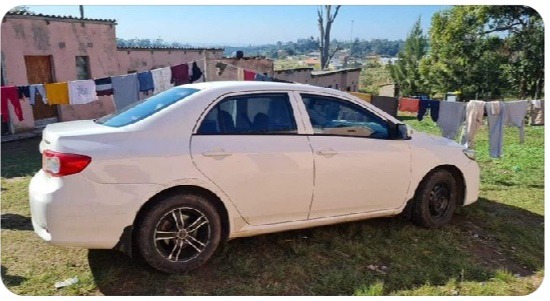 The team immediately arrested the house owner and he was then questioned about his team, he told the officers where his team was and they were all arrested and the stolen good were all recovered.

A swift reaction lead to the recovery of the white Toyota Corolla its another vehicle that gets stolen more often in South Africa, it's important for South Africans to get their vehicle fitted with tracker and the motive behind the stealing of the vehicle was to sell it to foreign nationals.

Crime is currently bad in all parts of South Africa and feel lucky when you haven't been a victim of crime because currently people are being treated badly on their own property, they steal, rob or hijacked.

Content created and supplied by: Fast_updates (via Opera News )

"She looks like she sells veggies" MamKhize dragged by catfish, Chris Excel

Bad news South Africans, this is what is going to happen this week