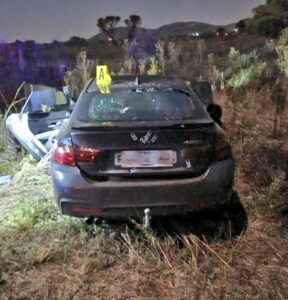 On the 14th of May, after a vehicle pursuit and a shootout in Westernburg, which is located outside of Polokwane in the province of Limpopo, two suspects, ages 25 and 28, were apprehended.

When the bank manager, who was 56 years old at the time, went out for a run in the morning, the suspects reportedly grabbed him and took him away. Later, the kidnappers made contact with his family members and requested money in exchange for his freedom.

The suspects arrived in two BMW automobiles at the prearranged meeting place, where the money had been left for them to retrieve. This led to a car pursuit with the police, during which one of the BMWs lost control and veered into the bushes. The police were able to catch up with the vehicle after the chase.

Two of the suspects were taken into custody, and the victim was saved, although she was hurt.

According to the spokesperson for the Limpopo police department, Brigadier Motlafela Mojapelo, an operation that was carried out by a group of detectives, with assistance from the tactical response team and hostage negotiators, resulted in the release of the captive and the arrest of two suspects.

According to what he heard, the kidnappers wanted a significant sum of money in exchange for his safe return to his family.

Mojapelo said that the situation was brought to the attention of the police, who promptly began their investigations into the subject. He said that the ransom money was subsequently delivered to the location that had been previously agreed upon for collection.

"A high-speed automobile pursuit occurred, and the driver of one of the cars, which was carrying the kidnapped victim, lost control of the vehicle and veered into the surrounding woods, where they came to a stop. Two individuals were subsequently taken into custody when it was discovered that they had been shot.

The victim sustained injuries during the gunfight and was sent to the hospital, where his status has been described as "stable." Both the money and the BMW were successfully retrieved from the suspect.