Alcohol is killing our young people, should SA government raise the minimum drinking age to 21 ?

South Africa has one of the largest number of alcohol abusers in the world, and the government is making efforts to end the nation's binge drinking culture. President Cyril Ramaphosa made the promise to root out the scourge of alcohol abuse, especially among underage children. He was speaking at the mass funeral service of the 21 people who died at Enyobeni tavern on 26 June. The funeral was held at the Scenery Park Sports Field in East London on Wednesday. The 12 girls and nine boys died under mysterious circumstances at the overcrowded tavern in the early hours of that Sunday. The matter is still under police investigation. During his one-hour speech, Ramaphosa brought alcohol abuse and underage drinking into sharp focus on Wednesday. 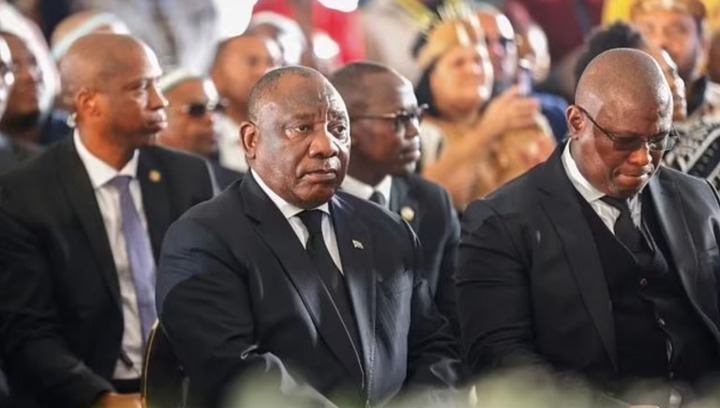 He said: South Africa has one of the highest rates of problem drinkers in the world. We will continue to enforce regulations around alcohol being sold in larger container sizes in a manner that encourages binge drinking. The president said binge drinking, even among over 18s, was a growing problem. He said institutions of higher learning need to look at ways to curb the availability of alcohol on its premises, including in residences and at recreational facilities on campuses. "Because what happened on 26 June 2022 in Scenery Park was a crime. We share a responsibility, as a people, to ensure that a tragedy like this never happens again," said Ramaphosa. 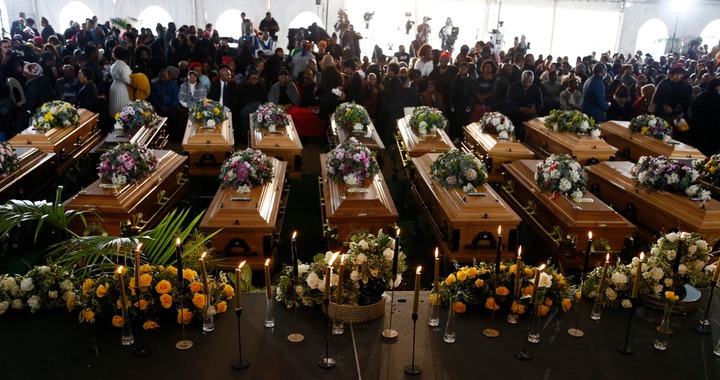 He said he had received calls to elevate the legal drinking age to 21, with hopes of preventing the tavern tragedy from happening again. Ramaphosa's frank statement was met with rapturous applause from the crowd. He said he would leave this to the nation to debate and find a consensus, adding that it was important to have the discussion as young people could easily fall into the trap of alcohol addiction. Giving personal details of each and every victim, Ramaphosa said those who died wanted to serve their communities and serve their country. Ramaphosa said Velaphi was looking forward to studying Tourism Management at Buffalo City College. He said Nzima was in Grade 12 at Alphandale Senior Secondary School and loved mathematics.

Ramaphosa said Methuko would have celebrated her 17th birthday on Tuesday, and she told her mother she was planning to buy two cakes to celebrate. Bekiso would have turned 17 in November and liked playing soccer with his friends. Mateyise attended Lumko High School and he loved soccer and watching rugby on TV. Tuesday would have been his 15th birthday. Wexu was a brilliant learner, Ramaphosa said, adding that when his family asked him how his recent exams had gone, he said: "You know, I never fail." Oyena Ngoloyi was buried by her family in Middledrift on Tuesday and was popular at school, the president said. Ramaphosa said one of her friends wrote on her Facebook page: "Lala ngoxolo mntase.

Greet those in the house who have left us, and please be our star when we go out at night." Tshemese was quiet, respectful and helpful around the home, while Bolsiki was known in the community for always looking neat and tidy, and for working hard at Qaqamba Senior Secondary School. Ramaphosa told mourners that Zilindile's siblings said they would miss how he was always patient with them and that he loved children. He said one of his teachers had described him as a gentle spirit. Sanarana wanted to become a lawyer, while Mgangala from Mthiza High School liked hanging out with his friends. Ncandana, who was doing Grade 12 at West Bank High School, wanted to be a policeman. Looking at Cele and the police top brass, Ramaphosa said: "Minister, national commissioner and provincial commissioner, he wanted to work for you.

He wanted to join you and serve his country." He said Ngqoza had dreams of becoming an actress and competing on Idols SA. Monelo was a talented artist, who drew portraits of family members and of people in the community, while Nkani was the last-born of her mother, who was described as kind and a big dreamer. Rangile, who will be laid to rest this weekend, was a smart dresser and much-loved by his family, said Ramaphosa. Sobethwa was popular with her family and friends at Kusile Comprehensive School, who held a memorial service for her, while Thukuthe was a learner at Mzokhanyo Senior Secondary School. Ramaphosa said Mahlakahlaka was in Grade 9 - and, at the school's memorial service, her classmates described her as a beautiful flower with a lovely smile.

The president said Silwane attended Zwelemfundo Primary School and that his last words to his mother before going out that night were: "I'm coming back, Mama." Eastern Cape Premier Oscar Mabuyane said the passing of the youngsters deprived the government of civil servants, who would have made an effective contribution to the development of their communities. "As a nation, we have lost future doctors, nurses, engineers, teachers, entrepreneurs and future world sports champions," said Mabuyane. He said it was saddening to note that, in this small community of Scenery Park, there were 19 taverns. "Yes, there is unemployment and people must make a living, but 19 taverns is just too much," added Mabuyane. He said leaders in government, in traditional settings, in families, in political parties, churches, civil society, businesses and other strata had a responsibility to ensure communities were not drowning in liquor outlets.

4 Little Signs That Confirm You've Found ' The One '