A motorist shoots two 'blue light gang' hijacks suspects, but is killed in a shoot-out.

By Mvelase (self media writer) | 17 days ago 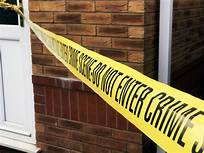 At the weekend, two imposters were slain while attempting to kidnap an armed motorist in Mpumalanga. The driver, from Rietvlei in Gauteng, died as a result of his injuries sustained during a shootout with the guys on the R50 motorway near Delmas on Saturday. According to police spokesperson Brig Leonard Hlathi, one of the suspects has previously been arrested for hijackings.

According to preliminary findings, two individuals in a VW Polo Vivo outfitted with police blue lights attempted to seize the driver of a Toyota Hilux Double Cab. “The alleged hijackers were found with police face masks as well as reflector jackets. Two firearms were also seized from the scene and the serial number on one of the firearms has been filed off.

“The confiscated firearms, one belonging to the victim and the other to the suspects, will form part of the probe.”

Hlathi said several hijackings by a “blue light gang” had been reported before to Delmas police. “Some of the suspects [in these cases] have since been arrested and their cases are before court.”