In KZN, tears as this happened in N2. Check here

By Dumoh (self media writer) | 7 months ago

Furious protestors obstructed entryways to the N2 highway on the South Coast with huge rocks, burning-through logs and rubble on Monday

Savage battles hindered traffic at sections to the N2 on the South Coast near Port Edward on Monday morning. 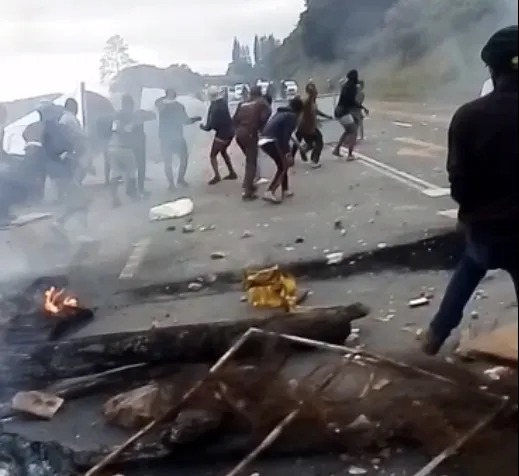 The protestors blocked the road with gigantic rocks, logs and rubble which they had set land.

Watch one of the accounts here:

One N2 protestor can be heard in a video in which he yells to lawmakers saying 'we are battling for structure and progression.'

"Difference action discharged recently in the space of KwaNzimakwe. The dissidents blockaded all of the entries of the N2 from the space," Gwala said.

"Around 400 people took to the road in the early hours of the morning and used shakes and logs to prevent the road. The N2 among Munster and Port Edward is by and by hard to reach in view of debris put making the rounds," she said.

Gwala said that Port Shepstone Public Order Police were at present checking the condition on the N2.

"No damages or wounds have been represented," Gwala said.

The lower South Coast space of KwaZulu-Natal has been tortured by intermittent help transport battles of late. Awful protestors have more than once hindered the N2 and interlinking roads, creating traffic turmoil in the locale.