Durban Shoprite Truck Has been Looted

By RSA_Updates (self media writer) | 4 months ago 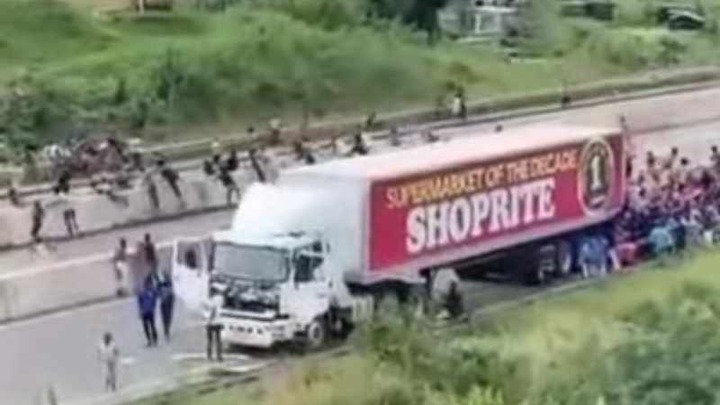 In a video many individuals are seen at the back and side of the truck while a few others are stumbling into the street.

The video was shared by security gatherings and by Metro Police head Steve Middleton.

In the video, a few shots are heard as well as shouts from the gathering of thieves.

As a Metro Police vehicle speeds towards the truck and comes to a sudden end, the shouts get stronger and certain individuals are seen taking cover behind substantial pieces that others had bounced over minutes sooner.

KZN Flood Relief: 'No measure of defilement, maladministration and misrepresentation will be endured'

When the officials left their vehicle a large portion of the thieves had gotten away from the truck.

A lady shooting the episode is heard saying, "What has South Africa come to… "

Middleton posted that there was a fantastic reaction from Metro Police and the SAPS and that the truck was securely accompanied out of the area.

Remarking on the Facebook post one individual said: "Great individuals ! METRO PROUD ! As though we haven't adequately experienced... how could it be alright to simply take what's not yours ! When is this brute way of behaving going to injure this nation ! Take care of business individuals."

One more said: "All around good... This should reach a conclusion now...enough is sufficient... We are worn out on our own kin playing with our economy. We are going through harsh times and they need to compound the situation. Nxa. Keep doing awesome."

This comes after IOL announced that a gathering of local area individuals entered two business premises at Umlazi H and J segments last week following the weighty rains and flooding and took food and apparatuses.

Police answered at the two premises and captured an aggregate of 12 suspects and the taken regular food items were given back to the senior supervisor.

In one more occurrence last week, a gathering were seen swimming through rising waters to plunder from transportation compartments in Prospecton.

The Mercury detailed that the Provincial Executive Council led by the KwaZulu-Natal Premier Sihle Zikalala, denounced reports of the plundering of steel trailers.

The chamber said policing have been sent.

"We approach all policing to guarantee that all property is shielded from culpability and that lawfulness is kept up with during this period," the gathering said.

During an instructions on Sunday on the mediations made to date since the devastating floods moved throughout the region, Zikalala said the SAPS has additionally sent a group of work force to guarantee wellbeing and secure and obstruct criminal components that might endeavor to utilize the misfortune to seek after crimes.

"We wish to deter our kin from engaging in any crime particularly when the attention should be on saving lives and modifying our excellent area," he said.