Family Is Very Confused After Their Child's Grave Was Dug. 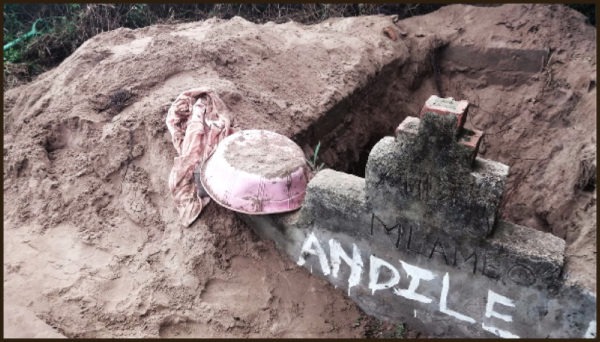 THE Mlambo family in Dukuduku, Mtubatuba, was shocked to learn that their 10-year-old daughter had been dug up and killed.

Sbongile Mlambo, Andile's mother, who died in 2011 after a sudden illness on her way back from giving birth, said she had no doubt that the perpetrator was a family member.

She told the source that her daughter died a month later. She became very sick and cried because she saw animals trying to kill her , so she died and left the baby.

She said he was shocked last year when a girl who was acquainted with her children came to inform him that she was in the cemetery.

“We rushed there. I almost fell to the ground when I arrived at the cemetery. My daughter's grave was just dug up, and we were still in the concrete. The person who did this had time, knowing full well that no one would notice.

“First they rolled the stone away from the tomb, and then dug it out into the bones. We found that they had taken arm and head bones, and shovels they dug and left them outside the grave, ”said Mlambo.

SHe said the clothes of her daughter, who was buried worn had been set aside.

"The only thing that makes me suspect that the person who did this is in the family, who would have had the courage to dig a concrete grave and when it was written?" she said.

She told the source that there were disagreements in her family, but she did not expect them to be so upset that they abused her daughter while she was resting.

“It's hard to sleep because we don't know what the person who took the bones will do. We have strong suspicions that he will use it, ”said Mlambo.

KwaZulu-Natal police spokeswoman Col Thembeka Mbhe-le said police had opened two cases of illegal excavation of the grave, but no arrests had been made.

A lady complain about Home Affairs' service and a lawyer jumped in to help her report the matter.