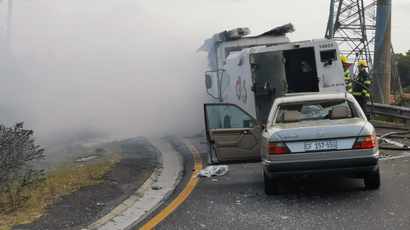 CAPE TOWN - Suspects bombed a cash-in-transit vehicle along the N7 on-ramp in Cape Town on Tuesday which led to a frenzy on the busy road as bystanders swarmed the cash van and began taking the money that spilled onto the road.

The scene unfolded before the eyes of motorists before 7 pm as police managed to arrest four suspects.

Video footage of the scene shows a shoot-out in traffic as the suspects tried to evade arrest.

He said it was reported that a Jeep driving along the N7 highway stopped abruptly in the middle of the road, causing a light delivery vehicle to collide with the cash van.

“Suspects are alleged to have used explosives to blow the safe open. One vehicle is reported to have caught fire during the robbery.

“Members of the Durban National Intervention Unit responded to the robbery and during the shoot-out, one suspect sustained a gunshot wound, whilst the other injured himself during the explosion.

“Both the security guard and the driver of the cash van also sustained gunshot injuries during the ordeal and were taken to hospital for treatment,” Netshiunda said.

At the scene, police recovered a 9mm pistol. 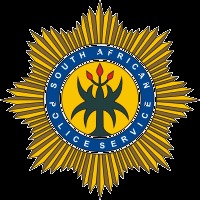 The four suspects, aged between 21 and 42, were apprehended and will appear in the Goodwood Magistrate’s Court soon on charges of the cash-in-transit heist, attempted murder, the illegal possession of a firearm and ammunition, and possession of an explosive device.

Police have launched an investigation and are seeking suspects who left with cash from the crime scene.

“A 72-hour activation plan has been instituted to hunt down other suspects who sneaked away from the scene with an undisclosed amount of money,” Netshiunda said.

Look What They Did To A Traffic Cop Who Was Captured Manhandling Man? Mzansi Is Saddened. Read Mor