Phone Snatcher got what he Deserved after Mob Did this to His Car.

The people of South Africa currently has zero tolerance for criminal act and this can be seen in the manner in which their handle criminals who dispossess people of their valuable properties. 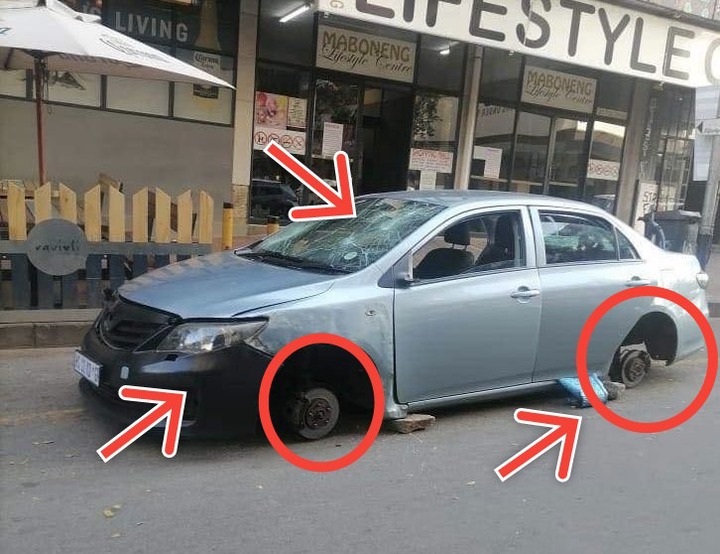 This actions by citizens became imperative after criminals increased the rate at which their operate across the country and the police couldn't handle such unlawful display, hence the need for citizens to intervene.

In an emerging report, a phone snatcher just met his match after his car got damaged by angry mob in Maboneng, Johannesburg. The phone snatcher took a lady's phone along Maboneng road and rushed to his car to zoom off, residents of the area chased him and pulled him out of the vehicle.

He was beaten to a pulp before he managed to escape but his car was damaged badly by the mob who broke his windscreen while others dismantled his four tyres and left with it.

The picture above clearly show the remains of the car after the incident. The phone was recovered from the man and handed over to the owner.

This was contained in a statement issued by Yusuf Abramjee on Twitter and it reads:

"The owner of this car allegedly snatched a cellphone: Maboneng JHB. Some people cornered him and damaged his car. Others made off with parts".

VIDEO: The man in white shirt calls himself the captain of the group driving Bakkies in Limpopo

Survivors of Enyobeni tavern speak out

Petrol prices may go up again, here is what they look like

Scenery Park Residents Picking Up The Pieces After Tragedy.