A funeral is supposed to be a place were people bid their final farewell to their beloved ones.

But it turned into a nightmare after a cemetery blunder when undertakers tried to remove the body from a coffin after discovering they had buried the wrong body.

A video of the series of chaotic events went viral on social media this week, but was later taken down by the family.

Speaking about his mother Sophie’s reburial, Dominic Plaatjies said he thought his family would receive closure on Monday with her reburial.

“They wanted to remove my mother from the one coffin and put her in another one,” Plaatjies said.

“They said this was a normal thing to do if they saw the coffin was damaged.”

The Plaatjies family had watched as four men decked out in full personal protective equipment dug up their mother from the Jacksonville cemetery. 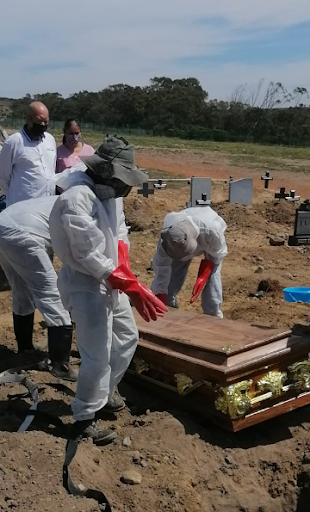 On the day of Sophie’s funeral, her husband, Andrew, and three sons were rerouted to the Jacksonville cemetery after having thought she was going to be laid to rest at the Bethelsdorp cemetery.

Sophie was reburied on Monday but the coffin exchange did not happen.

The funeral was handled by Doves Funeral Home, one of the largest funeral directing companies in SA. Doves official Noluthando Ngcangca declined to comment.

Workers arrived at 11.15am on Monday at the Jacksonville cemetery while the family had arrived 20 minutes earlier, Plaatjies said.

It was then that a second coffin was pulled out of the vehicle, leaving the family confused and, later, angry.

Doves had intended to transfer Sophie’s body into the new coffin.

He said the Bethelsdorp cemetery was chosen as it is within walking distance for his father.

Unhappy with the change in cemeteries, Andrew went to the funeral home after the funeral where they admitted to making a mistake with the cemetery relocation.