THE National Commissioner of Police, William Tsitsibala Dlamini is shaken at reports that a senior police officer is implicated in the burning of an OK Foods Store in Matsapha. According to highly placed sources, the officer who holds the position of senior superintendent appeared in CCTV footage, using explosives to bomb the shop.

The officer has since been arrested. It was gathered that the officer, who will not be named for now, works for the Operation Support Service Unit (OSSU). 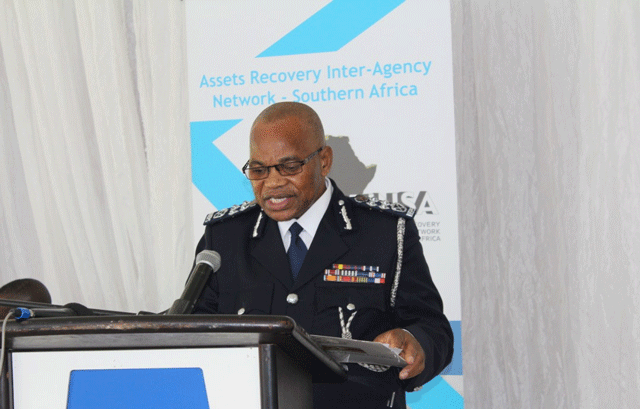 The source said the officer can be seen drinking an energy drink after rioters had looted and left the shop. After finishing his drink, it is alleged that the officer then started a fire which burnt the whole shop to the ground.

OK Foods was one of the companies which was badly affected by looting and burning during the protests which took place all over the country in June.

The shop in Matsapha was one of the first to be looted and burnt during the unprecedent protests which swept throughout the country. Dlamini confirmed getting reports on the matter. He said he was shocked that a police officer who had been given the duty to protect people and property used explosives to burn down a shop.

He said he had asked that a report on the matter be availed to him, and he expected it this morning. Businesses around the country suffered damages worth an estimated E3 billion during the protests.

A number of people have been arrested and have appeared in court for taking part in the looting and burning of shops.

These include Members of Parliament Mduduzi Bacede Mabuza and Mthandeni Dube who were charged with contravening the Suppression of Terrorism Act in that during the month of June, the two acting in furtherance of a common purpose with Mduduzi Simelane committed a terrorist act by inciting Emaswati to revolt against the government.

The sporadic protests took place over a number of weeks and other companies who were reported to have been affected include Buy Cash Hardware and Montigny Farms. His Majesty the King announced a Reconstruction Fund worth E500 million which will be used to compensate businesses and individuals who were affected.

The fund will be officially launched on September 6.