At times we are all made to feel like we are prisoners in our beloved country by the way criminals haunt and terrorise us day and night. A report was published today which showed what befell one driver who was employed by Hollywood Bets.

Last night while in Mawothi, KwaZulu-Natal, a gang of thugs descended on him and launched a scathing attack. He ended up getting shot dead and at that time he was dropping off staff from work.

The deceased was a 30 year old man and an unknown number of thugs descended on the fully branded Toyota Avanza vehicle which he was driving. The thugs opened fire towards the vehicle and the driver attempted to reverse. 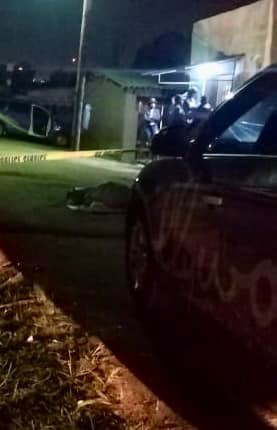 However, more bullet shots were fired towards the vehicle and some of the shots landed on the drivers head. These shots proved to be what took his life and the gang of thugs descended on the occupants of the vehicle and began robbing them. Valuables were taken from at least three passengers before these thugs fled from the scene.

After they had left, calls were made to emergency service providers and among those who responded were paramedics and law enforcement agents. A team of officers from the Reaction Unit South Africa which was also in attendance confirmed to the media that one adult male who happens to be the driver had been shot dead.

The three other occupants of the vehicle who got robbed were not injured in this attack. A manhunt is currently underway as the police seek to apprehend the thugs who were behind this attack.

From this incident, one could not deny that our once peaceful country has been turned into a crime scene. Residents cannot afford to have a peaceful sleep as they are being kept on their toes by armed criminals who are constantly robbing them.

My rape experience hurts, but I’ve moved on –Juliet Ibrahim