Two security guards and a nurse have been fired; after a video of them beating a patient went viral

Two security guards have been fired and a nurse involved in the incident of a video that went viral on social networks; has been suspended.

In the video; they are seen beating a patient on a hospital bed in one of the wards of a hospital in Escourt; Kwazulu Natal Midlands. 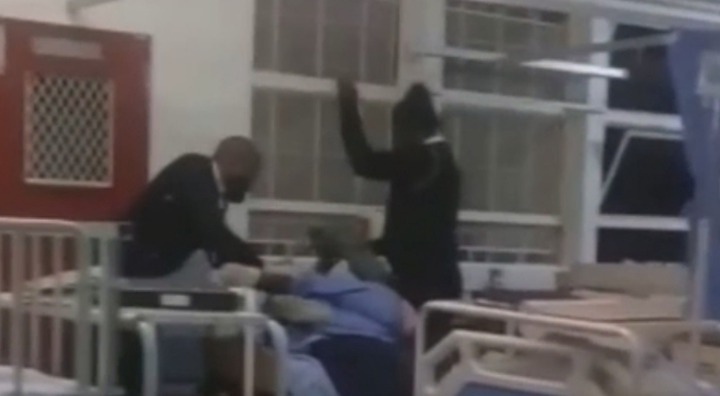 In the video which started circulating over the weekend; two security guards are seen slapping a male patient; and asking him if he is refusing help. In the second video the guards are seen pressing him down while two nurses inject him on his buttocks.

In the video which started circulating over the weekend; two security guards are seen slapping a male patient; and asking him if he is refusing help. In the second video the guards are seen pressing him down while two nurses inject him on his buttocks.

The minister of health in Kwazulu Natal; Nomagugu Simelane-Zulu; applauded the suspension of the securty guards; she expressed concern about the incident shown in the video.

"It is very worrying that the person who recorded the video; decided to post it on social networks; rather than show it to hospital management." Said Simelane-Zulu.

If those who recorded it; followed the correct channels; the patient would not have continued to be abused and suffer in that manner." She said.

"We heard that it was one of our nurses who recorded the video. We are busy investigating and have asked the hospital management to also do an internal investigation." She said.

She continued to say; the department; asked the company contracted to provide security to the hospital; to fire their security guards with immediate effect.

The video which is on everyone's lips on social media; left many people annoyed. Others expressed their anger; saying the security guards should be arrested.

" South Africans Were Looting Our Goods" - Illegal Immigrant Speaks Out.