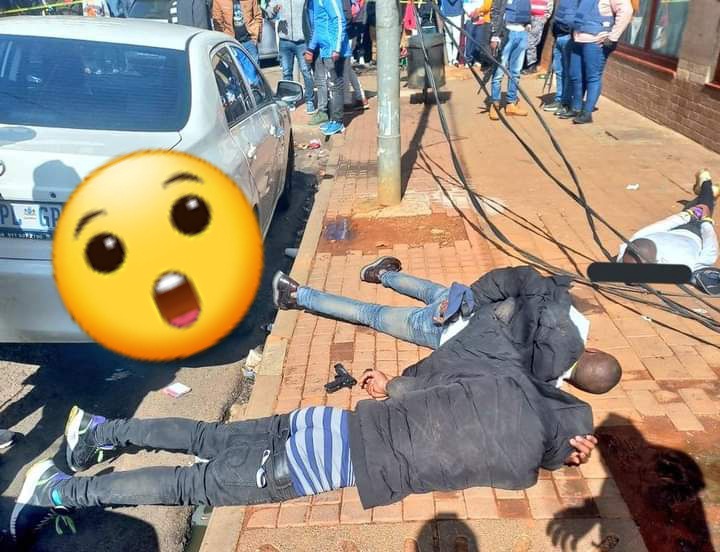 The Johannesburg Metropolitan Police Department (JMPD) IIOC Undercover officers have secured the successful arrest of three male suspects (pictured above) for armed robbery and possession of stolen property, they are currently detained at Johannesburg Central SAPS.

According to the Johannesburg Metropolitan Police Department News report, earlier today, Monday, 27 June 2022 a victim was approached by male suspects who pointed him with a firearm and demanded his cellphone then fled the scene, the victim immediately called the JMPD IIOC Undercover officers in the JHB CBD for assistance.

The JMPD IIOC Undercover officers went to look for the suspects while being accompanied by the victim, they were spotted and the complainant positively identified them as the perpetrators.

Officers searched them and found the victim's cellphone, four more cellphones that are suspected to have been stolen, and an unlicensed firearm.

The suspects were arrested on charges for armed robbery, possession of an unlicensed firearm, and possession of stolen property, they are detained at Johannesburg Central SAPS and will soon make an appearance in court to face the said charges.

Civilians should be alert at times when using a cellphone while walking around in town, criminals are always on the look out for people to victimize.

Brilliant Boy Scored 7 A's In His Exam, But Rejected By University For Scoring B In One Subject

ANC in KwaZulu-Natal says it accepts the resignation of the provincial Premier Mr. Sihle Zikalalala

“They accuse me of aligning with Ramaphosa” outgoing KZN premier Zikalala