In a hit-and-run accident, a police van kills a 13-year old A police van driver is facing serious charges after allegedly killing a child in a hit-and-run accident. A tragedy occurred on Thursday in Gauteng's East Rand.

A 13-year-old boy was killed in KwaThema on the East Rand, according to reports. Because the police van did not stop to accept responsibility for the accident, it was classified as a hit-and-run. The deceased was with her 7-year-old brother, whom she appeared to push away in an act of self-sacrifice to save his life.

Witnesses to the heinous crime, which occurred in broad daylight at 14:20, are said to have quickly followed the police vehicle in order to obtain its license plate. "Yes, we are aware. "We found out about it last night (Thursday) when members of the public reported it to us on social media," said IPID spokesperson Grace Langa.

"Indeed, it occurred. We are beginning our investigation into the matter today (Friday). Langa stated, "We will ensure justice for the family."

Two cops were said to be in the van. A female police officer was behind the wheel. She is accused of knocking down the child, driving away, and leaving the child's body on the scene. Langa, on the other hand, was unable to elaborate.

Langa stated that they will also charge the police officer on duty for failing to report the incident to the police watchdog in accordance with the IPID Act. The police watchdog has not ruled out the possibility of additional charges being filed. "We will get justice for the family," Langa promised.

If it hadn't been for a Twitter user with nearly 20,000 followers, the terror would have gone unnoticed. 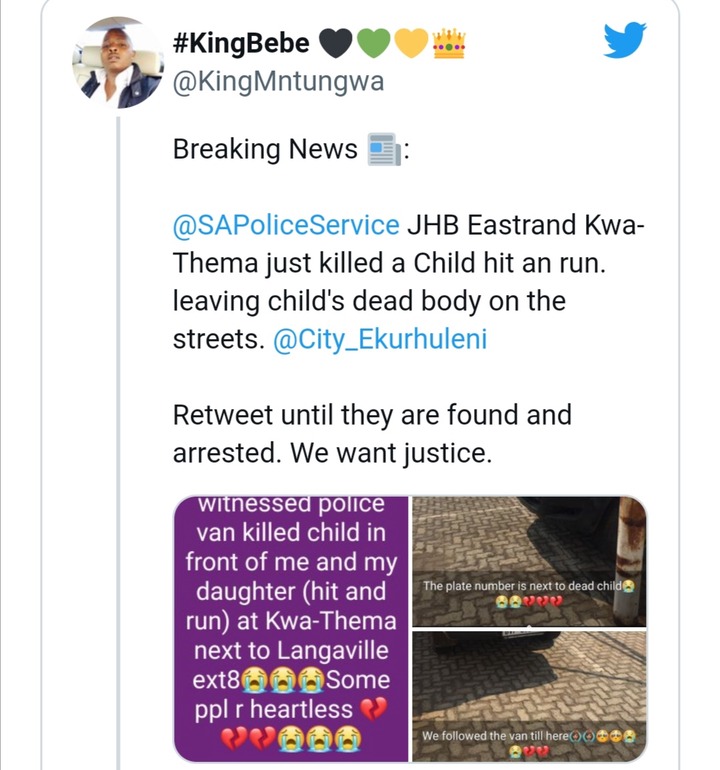 The person who shot this video is brave. Look at what went on to the hijacker. (Video)

R22 million on National Flag should be use toward Mass Deportation Of Zimbos SA man Suggests.