The Issue of Immigration is a huge problem in South Africa and the effect of Illegally moving into South Africa from other countries is really biting hard on the people who now have to compete with foreigners for every available opportunity. 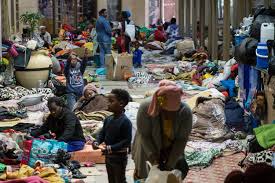 For years now, the people of South Africa has been calling on their government to make laws that would put an end to unnecessary Immigration of foreign nationals into the country, yet the government seem not to be bothered about the who Immigration drama.

A recent statistics released show that South Africa's unemployment rate is currently at 34 percent and it is expected to increase if nothing is done about it.

Meanwhile, a South African man known as KingJosh on Twitter has called out the government on social media over its Immigration policy.

He claimed that there's currently no law stipulating the number of refugees South Africa can take in.

He added that even if over 500 thousand refugees storm South Africa in one day, there are chances that they would come into the country.

"South Africans are under siege from government Immigration policy. Accordingly there is no limit on the number of refugees the country can take, this means even if 500k refugees come in one day this country will not stop them. Removing the Immigrants Must happen as soon as possible."