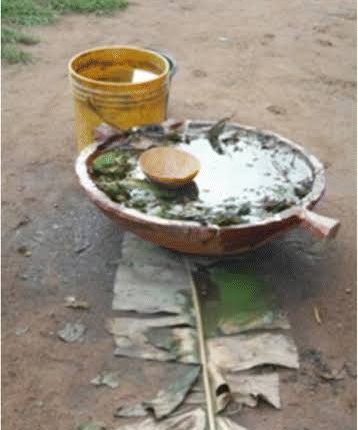 Rilwanu Salami, a 23-year-old suspected yahoo boy who died strangely after bathing in "spiritual soaps" in Ibadan, the capital of Oyo State, has been apprehended by Nemesis.

According to Orient Daily, late Salami traveled to Ibadan with two pals to meet with an Islamic preacher for a spiritual bath, which ultimately led to his death.

Salami proceeded to the residence of another Alfa identified as Fagbemi to observe an Egungun festival after taking a bath in the cleric's house, according to a police reliable source.

“When the deceased took his bath with the soaps, he came to my place to watch the Egungun festival,” Alfa Fagbemi claimed in a statement made available to the police at State CID, Panti, Yaba Lagos. He was carrying a number of different soap brands. The Egungun began their exhibition outside my house while he was relaxing, which prompted Rilwanu to emerge and momentarily observe the sight.

“He said he had a headache and was cold when I entered the room. I gave him paracetamol to relieve his headache, but he couldn't speak again before I realized what had happened. As a result, I had no choice but to contact his father in Lagos. The father then told me to send his son to Lagos as soon as possible so that he might receive good medical care. Danfo bus brought us to Lagos.”

Mr. Nureni Salami, Salami's father, claimed that when he was notified that his son was not feeling well, he directed the Alfa to bring him to Lagos, only to discover that the illness was serious enough for him to be unable to communicate. My kid didn't inform me he was going to Ibadan for a spiritual bath, so I suspected foul play.

“I told him not to move with his two companions, but he disobeyed my orders. I felt uneasy seeing him with those buddies, and I had advised him to keep away from them on several occasions.

“When Alfa Fagbemi brought him to Lagos, I was astonished. We captured him and handed him over to the police at Elere Police Station in Agege, Lagos, when he attempted to flee. He stated, "My son died on the second day."

Meanwhile, the case is being investigated by officers from the State Criminal Investigation Department, SCID, Panti, Yaba.