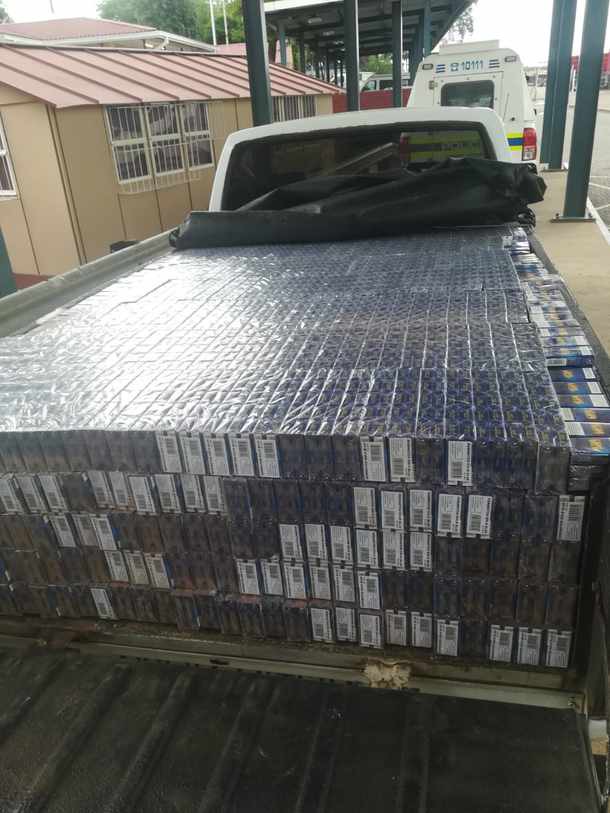 Two men have been arrested in Rustenburg for possession and smuggling of illicit cigarettes. The pair were carrying cugarettes with an estimated street value of more than R600 000 in Limpopo.

Brigadier Motlafela Mojapelo who represents the police said the two were arrested on Tuesday the 18th of January. The arrest was effected by a partnership between the police and the rural safety structures in the Saamboubrug policing area.

He said “The police received a tip-off from local farmers in the area. The tipoff was about two NP300 Nissan bakkies that were travelling from Musina using the Alldays road. The pair was transporting illicit cigarettes and heading towards Saamboubrug policing area,” he said.

A snap operation was conducted by the local police with the assistance of the farmers at Maasstroom crossroad with the intention of stopping and searching the vehicles.

“Upon arrival at the crossroad, police attempted to stop the two vehicles but they did not comply and they sped off at high speed using the road that leads to Tolwe policing area.

“A high-speed chase ensued with the assistance from the farmers and Tolwe police. Law enforcement managed to stop one vehicle that was fully loaded with illicit cigarettes and one male suspect was immediately arrested on the spot.”

The arrested suspect said the other driver abandoned his vehicle that was also loaded with illicit cigarettes and fled into the nearby bushes on foot. He was attempting to evade arrest, but was later found hiding in the bushes and he was arrested.

“The illicit cigarettes found by the police carried an estimated value of R667 326 and were loaded in two motor vehicles. The police confiscated the cars and their contents.

“The suspects arrested where aged 35 and 41. The two are expected to appear at Senwabarwana Magistrates’ court under charges possession and smuggling of illicit cigarettes,".

SAD|| Man shot and killed while doing this for his girlfriend