This happened in the car of Molefe in Ekurhuleni. Check here

Knock TWICE IN ONE DAY!

this man is blaming Ramaphosa because he opened alcohol to be sold and the accidents are increasing.

Molefe Rakosa says his vehicle was knock by a bakkie with a City of Ekurhuleni logo at the end of the week. Photograph by Muntu Nkosi.

A DRIVER in a bakkie with a City of Ekurhuleni logo crushed his vehicle from behind on Saturday, 13 February.

Molefe Rakosa escaped his vehicle to stand up to the driver, who was clearly flushed.

As he was caught up with conversing with him, another alcoholic driver found Molefe's blue VW Polo Vivo.

At the point when the main driver, who drove a Nissan NP300 bakkie, saw Molefe leave to defy the subsequent one, he ran away from the area.

Be that as it may, Rakosa figured out how to get his vehicle's enlistment number. 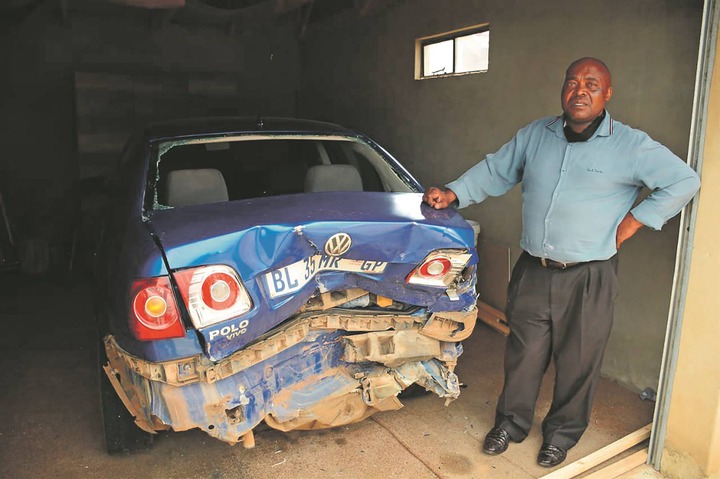 He additionally required the second driver's vehicle keys to prevent him from fleeing also.

Molefe reached the City of Ekurhuleni call focus to report he'd been knock by a city official yet got an unfair arrangement.

"I was made to hang tight for over an hour and nobody appeared to need to help in light of the fact that a Metro vehicle was included," he said.

"At the point when Metro officials at long last came, they captured the second driver for crazy and alcoholic driving," he said.

"They moved their associates' case to the poice for them to open a mishap report.

"I have the enrollment number. That man should pay for harming my vehicle. I'm not going to release this."

"Individuals are reckless out and about and we're enduring a result of such drivers," he said.

A mishap report was opened for Molefe.

Representative Kobeli Mokheseng encouraged Rakosa to go to his nearby Metro cops workplaces and request to see the station officer, who'll then development on his case.

A lady bought pads at an Indian shop, See how they looked like