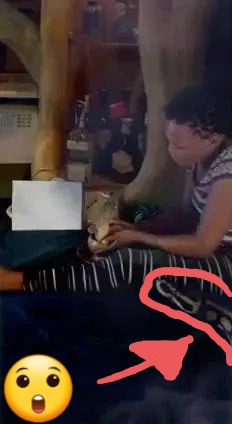 According to the Taxi Times news report, an unknown woman made a shocking video recording which caused a lot of stir on social media (Facebook), on the video she is heard saying that the bowl she's holding must be filled with blood after she said that she commanded her muthi to pick on the list of names she has.

After a while a name Portia appeared on a piece of paper that she was holding, she began to perform a ritual while a python was moving all over her her, it's unclear whether this video was actually authentic or staged but it certainly blew the minds of many South Africans, hopefully it's staged because of its authentic legal action can taken against her.

Here are some of the comments from South Africans:

"I want them to use cobras and mambas not python, it's a friendly snake".

"Does she think bewitching her will solve her problems, she cant change what is meant to be another person's life, Portia will rise she will find no peace the day she dies".

"Why Can’t They Enrich Themselves Instead Of Bringing Misery To Others".

"witchcraft is becoming a norm.. so now they bewitch and bravely talk about it in public?"

Ladies, Your Privates Will Smell Better If You Do This