Sassa Fraud. A man was caught with 700 Sassa Cards and a Stolen Car

By Xiya (self media writer) | 2 months ago

Durban, South Africa - A 32-year-old man has been detained for allegedly stealing more than R100,000 from the South African Social Security Agency (Sassa). 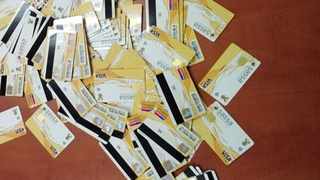 Tumbikani Luwazi Mzamara was allegedly renting an apartment for roughly R13 000 per month in Ballito's Imbali Ridge Estate on the KwaZulu-Natal North Coast.

Captain Nqobile Gwala, a spokesperson for the KZN SAPS, said uMhlali police got information regarding a vehicle suspected of being stolen in Ntuzuma. The vehicle was spotted in the Ballito area, she said.

"The cops arrived at the location and discovered the vehicle parked in front of a Ballito flat." "The occupant of the flat was interviewed, but he was unable to provide a satisfactory explanation for why he had the vehicle," Gwala added. Police examined the flat and found 771 different cards, cash, laptop computers, ATM card readers, six stolen speed points, vehicle papers, and a large number of coded and encoded ATM cards, according to her.

"The suspect was soon apprehended and charged with having stolen stuff," Gwala said.

Mzamara has been charged with theft, fraud, and violating the Social Assistance Act, according to a Sassa representative.

He has appeared in court twice since his arrest and is due to apply for bail on Wednesday.