Electricity is suspected when shacks get burnt

By EYRFM-NEWS (self media writer) | 13 days ago 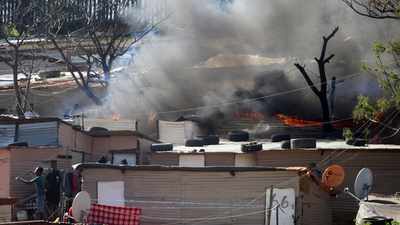 THE intervention of firefighters has halted the spread of a fire at a shack in Cato Crest, Mayville, yesterday morning.

Six shacks were destroyed as a result of the incident, which is believed to have been caused by a power outage.

By the time EYRFM NEWS arrived in the area, members of the public were still shocked, some busy evacuating goods from some of the nearby shacks. A member of the public who spoke to reporters, who did not want to be named, said the owners of the slum were on duty at the time of the incident.

“The electricity went off at 6am and he came back at 8am. I think that when the fire started, they may have left the electrical connection and forgot about it, and when you returned it caught fire, and the neighboring shacks burned down, ”said the member.

He said it helped that firefighters arrived early and managed to clear it because everyone was scared, fearing he would spread out and burn down a number of shacks.

Acting Division Commander of the Durban Fire Brigade, Sifiso Mtshali, confirmed that no one was injured.

"It is alleged that the fire was caused by illegally connected power lines," said Mtshali.

Handsome Lesotho Man Caught through the Help of Dog after Failed Attempt to Hijack a Car.