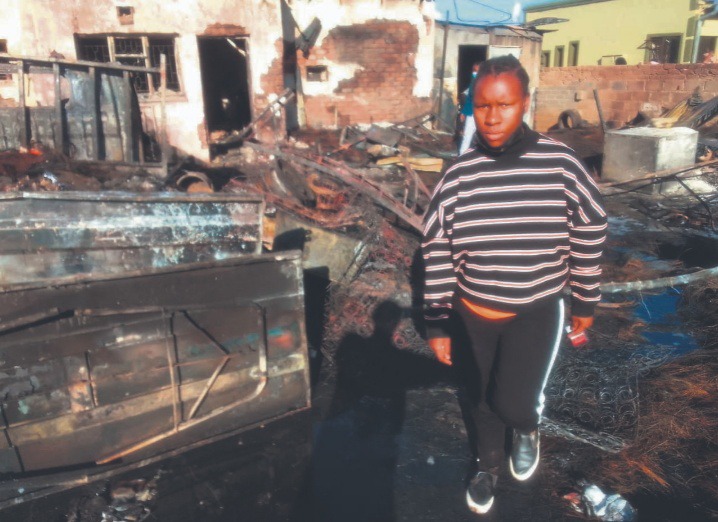 The house that Lerato Sibanda shared with his family in Soshanguve block H was ravaged by fire a week ago.

On May 18th, Lucky Malahlela was forced to watch in horror as the fire reduced both his place of business and his home to ashes.

The 35-year-old man from Soshanguve block H, Tshwane, was unable to save his secondhand tyre company, which had a value of more than R60,000, and he was unable to provide for his family of 11.

According to what Lucky shared with the Daily Sun, he and his family have come to the conclusion that the fire was started by a defective electrical pole that was linked to their house. He said that even his Nissan Cabstar, which he used to gather old tires, had sustained damage.

He said that the fire began in the morning, and due to the fact that he had a stack of tyres in the backyard, it took Tshwane Emergency Services many hours to put the fire out. He said that it would be difficult to begin life all over again. "There are no plans in place for us at this time. "We are still in complete disbelief," he remarked.

Lerato Sibanda, age 21, a member of the family, said that she woke up that morning to get ready for school and discovered that there was no electricity.

At first, she said that she was under the impression that it was load shedding.

"When I looked outside, the utility pole was already well on its way to being consumed by flames. "We have nothing left," was what she stated.

According to Lerato, they need a place to stay, food, clothing, and several other household necessities.

She said that all of their identification and other documentation were lost in the fire.

Tshwane Emergency Services got a report at around 5:00 a.m., according to Charles Mabaso, who is the spokesperson for the organization. When firemen arrived at the location, a home with six rooms was on fire, and tyres in the yard were also burning.

"Unfortunately, the whole home caught fire, and the garage was the only area of the house that was partially impacted," he stated.

According to Mabaso, the fire did not result in any injuries to any of the people there.