By Guybrush (self media writer) | 4 months ago 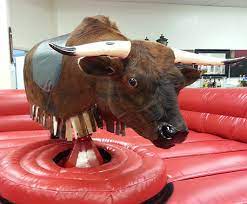 Woman, 26, dies after being flung off A mechanical bull ride and suffering a cardiac arrest during night out.

The heartbroken mother of woman who died after falling from a mechanical bull on a night out is mourning her daughter. Jessica Lally, died from a cardiac arrest after she fell from the mechanical bull at a bar in England last October. Her greif stricken mother Joan has now described the loss of her daughter, who had been planning to her wedding to her partner later this year, as 'heartbreaking' and said 'sometimes we still fall into pieces'.

Jessica's family have now initiated a fundraising effort to install more lifesaving defibrillator equipment at public venues as this device could have saved Jessica's life had one been used sooner.

She was at a bar which had a mechanical bull that customers can ride, and Jessica's mother said that - like many other customers - Jessica decided to give it a go.

Joan said: 'She was in the bar and she went on the ride and was flung off and had a cardiac arrest. 'She was just on a night out. She'd not had a lot to drink. They'd been for a meal actually and they called in there afterwards.'I don't know why she decided to go on it. She was just having fun I suppose.

There was a nurse in the bar that night, so immediately she started to help her and they did eventually get a defibrillator but, unfortunately, it was too late and she passed away that night.

Content created and supplied by: Guybrush (via Opera News )

Contact The Police Immediately If You See This Woman