The most common way of characterizing personalities can come down on divisions inside, an inversion of what was thought to occur before, when decisions seemed to join parties.

It is conceivable that this interaction is currently working out inside the DA after the Phoenix banners disaster last week. Should it turn out that this misstep has cost the party casts a ballot and should it lose huge help in the neighborhood decisions, the DA may go through additional disturbance.

On Friday last week, the DA's KwaZulu-Natal executive, Dean Macpherson, apologized for the banners that had been raised in Phoenix and which were expected to be set up in different pieces of eThekwini.

The banners had perused "The ANC calls you bigot" and "The DA calls you saints", in a reference to what exactly occurred during the viciousness around there in July.

Macpherson himself had first guarded the banners. He was trailed by the DA's chief, John Steenhuisen, who directed a few meetings. He said that the DA was on the right track to raise the banners on the grounds that the ANC had regarded individuals who safeguarded themselves as bigots, and had exploited them.

Only 20 hours after the fact, the banners were eliminated.

It turned out to be clear during that time that the banners had not been approved by the top administration designs of the party. It additionally arose that numerous individuals, some in the party's top positions, had gone against the banners when they initially saw them.

The most open illustration of this was the DA's mayoral possibility for Joburg, Dr Mpho Phalatse, who said the banners were off-base whenever she first saw them.

Then, at that point, on Monday, it was affirmed that the top of the DA's lobby in Gauteng East, the previous MP Mike Waters, had left that position. He stays an individual from the party.

The language in his letter of abdication is scorching. He says that he is "stunned and alarmed by the shortcoming showed by my party" in the banners issue and that the party's "stooping statement of regret and choice to bring down these banners is shocking". 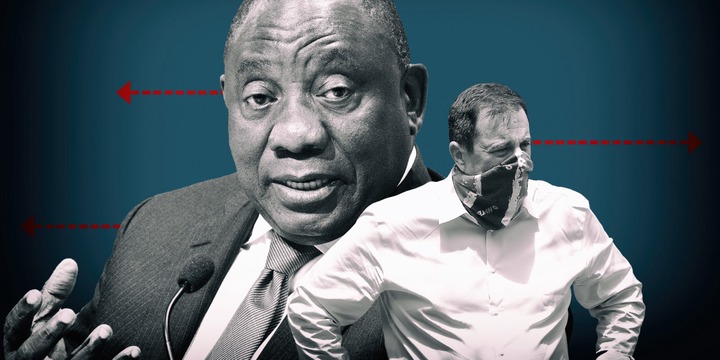 Waters proceeds to say that he "can't proceed to guard and advance a party that is able to do such gutless injustice" and that the furor over the banners is "made agitation".

In another telling expression, Waters clarifies that he will stay an individual from the DA since it's the main party whose qualities he upholds, where "I and other strong Liberals can speak loudly about the crying out of the self-righteous wokerati subverting the bearing of the party".

For some's purposes, simply the case that the response to the banners is "made panic" and the reference to the "hypocritical wokerati" might be viewed as affronts, or more awful, as an intentional refusal to get what the banners intend to the mind-boggling greater part of individuals who saw them.

They might consider it to be a finished dismissal of what our governmental issues ought to be, and what our general public really is. A portion of those individuals likely could be individuals from the DA.

This means that the party's concerns.

As the country's most racially assorted party, the divisions in our general public can be reflected inside it. This might be occurring now.

As a rule, these issues can be settled with solid initiative. One of the greatest and most troublesome errands of an innovator in a party is to connect these divisions, to fabricate and reinforce the solid interior alliances that it takes to construct an ideological group.

In any case, presently Steenhuisen might track down this more troublesome on account of his help for the banners in any case. The way that such countless individuals in dynamic situations in the party didn't know that they were being raised may make this harder for him later on.

Interlaced all through this are the characterizing issue of our general public — race and racialized imbalance.

Beginning around 2019 the DA has lost its first dark pioneer, Mmusi Maimane, its dark chairman of Joburg in Herman Mashaba, and control of the City of Johannesburg itself. It has likewise lost other dark innovators in huge positions, for example, Phumzile van Damme, while other previous driving lights, for example, Lindiwe Mazibuko host been exceptionally reproachful of the gathering.

The revealed renunciation of Waters features the issue in another manner.

On the off chance that individuals from the party who are dark are miserable at the DA's push behind these banners, then, at that point, there is somewhere around one white part who is so furious at the choice to eliminate them that he has left his position.

It is conceivable that he isn't the main individual in the party miserable at their expulsion. Considering Steenhuisen's solid help for the message in the banners from the get-go, he as well, and people around him, may likewise be baffled.

Steenhuisen's political race as a pioneer came after the appointment of Helen Zille as the seat of the DA's Federal Council. It was her political race that prompted Maimane's acquiescence, followed hours after the fact by Mashaba's.

Such is the truth of South Africa that the appointment of Steenhuisen, as a white man, to the situation of pioneer may likewise have represented this cycle to certain electors, hence coming down on the party and on these elements.

It ought to be recollected that it isn't just the DA that is experiencing divisions that might be strengthened in this political decision.

While the DA's divisions seem, by all accounts, to be in accordance with race and disparity, the ANC's concerns give off an impression of being about groups and position.

On Monday, the party's agent chief, Deputy President David Mabuza, met authorities in Tshwane in light of the fact that the ANC district there has gigantic disagreements about its applicant records.

So awful are the divisions that the party's head of races, Transport Minister Fikile Mbalula, even recommended that it would simply be feasible to manage this issue after the political decision, through the method involved with holding by-races.

All things considered: this is the head of appointment of the ANC recommending, before the nearby decisions, that the disagreements about ward up-and-comer positions in the party are so extraordinary they could be managed uniquely through by-races after the races. Staggeringly, he was saying this openly to electors before they cast their voting forms.

It could be essential to differentiate the elements inside the ANC and the DA now from what has occurred previously.

During a discussion around whether the neighborhood decisions ought to be converged with the common and public races, then, at that point, ANC secretary-general Gwede Mantashe once said he liked to have races each a few years since it assisted with joining the ANC. The party would have somebody to crusade against.

The equivalent might have been valid for the DA. The ANC as it was then, at that point, and especially the phantom of Jacob Zuma as president, may well have been a binding together factor for the DA.

Presently things have changed. Decisions might well bring about further, even long-lasting division in the two greatest gatherings.

If so it is an enormous change to our legislative issues and focuses on a fate of division and contradiction, wherein races develop divisions around what the gatherings really depend on, as opposed to facilitating them.

It is, obviously, important for a lot greater dynamic, both here and in different nations, on how certain components of personality have gone to the front in governmental issues.

Anticipating how this will end is troublesome. Be that as it may, this political race likely could be a significant venturing stone out and about towards governmental issues with no prevailing enormous gatherings and numerous little ones competing for power. DM Divided We Stand: DA and ANC internal pre-election pres... (dailymaverick.co.za)