Is it science or mysticism? Residents of a community in Oyo town, Oyo state, are still in shock after a tree believed to be around 100 years old fell in a rainstorm, killed four people and was resuscitated the next day, standing.

SOLA ADEYEMO in Ibadan reports that the site has become a pilgrimage center for some traditionalists and other devotees By all standards, it was considered normal rain on Monday October 4, 2021 around 6:45 p.m. 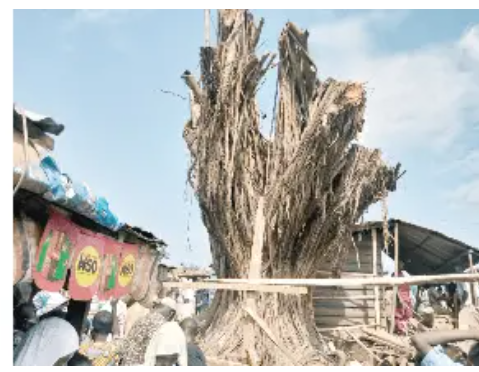 That was until a stormy breeze later hit a century-old Odan tree planted by a late Sango (iron god) worshiper and plunged the inhabitants of Sabo into Isale Oyo, Oyo town, in the panic.

The tree was uprooted, fell and killed four people. The centuries-old, tall, branching hydra-branched fibrous tree, which had served as an umbrella for many in the area, was shaken during the stormy rain, shed some leaves and was then uprooted, leaving its base gaping staring at the dumbfounded residents, branches blocking the nearby unpaved road.

A woman, who wanted to buy meat from a beef vendor next to the tree, was unlucky as she and one of her children were trapped. The meat seller miraculously escaped with injuries, but a Federal College of Education student, SPED (Special) was killed.

While revealing the identity of the only injured person, who was subsequently hospitalized as Saliu from Olubodun Compound, Sakutu region, two of the sons of the late Chief Adeleke (Baba Sango who planted the tree) Mumini and Babatunde Adeleke, gave the identity of the dead as: Bose Taiwo of Yaye Compound, Koso; Onifade Kafilat (the SPED student living in Niresa, Sabo; Abdul-Yekin Aduroti-Allah from Niresa Sabo; and 13-year-old Dare from Aigbin, Sakutu- all in Oyo town.

The bodies of the dead were recovered over late after four sawyers tried unsuccessfully to cut the branches until the fifth cut them off.For many people, the tree was possessed by spirits because the saw machines used were extinguished until this that the latter works effectively after a propitiation has been performed.

The mystical tone associated with the fall of the tree, around the same Tuesday 6:40 p.m., the now stocky tree that had already been cut off from its stems and branches, suddenly trembling and in the blink of an eye he stretched out, got up and sat upright exactly where he was uprooted. A careful look at the base of the tree showed no sign of it. 'he had been uprooted before.

Since news of the Odan tree's' resurrection' broke, a gigantic crowd esque of people had started to move around the tree, I worship it and worship it. It was sort of a Mecca on Wednesday when the Sunday Telegraph visited. To prevent unwanted acts from visitors to the scene, the elders and leaders of the region cordoned off the scene with a wooden fence.

Nevertheless, some so-called followers of the white garment “Aladura” had turned the tree into a sanctuary by wrapping the wooden fence in a white cloth while some had poured salt on the trunk of the tree. Many people, including students, climbed the trunk of the tree and the men of the Western Security Network, "Amotekun", struggled to control the crowd. A traditionalist, Madame Mogbonjubola Moyosore of Elepe Iseke Compound, Oyo, who also believes in the mysticism of the tree, and Olugbenga Adeleke of Yaaye Compound, interviewed by the Sunday Telegraph, said that "everything that happened here is a manifestation of the power of God.

But some people have tried to turn the tree into a place of worship, by spreading fabrics