By Renowned (self media writer) | 8 months ago

"I killed my roommate, sold his body parts to a pastor" Suspect 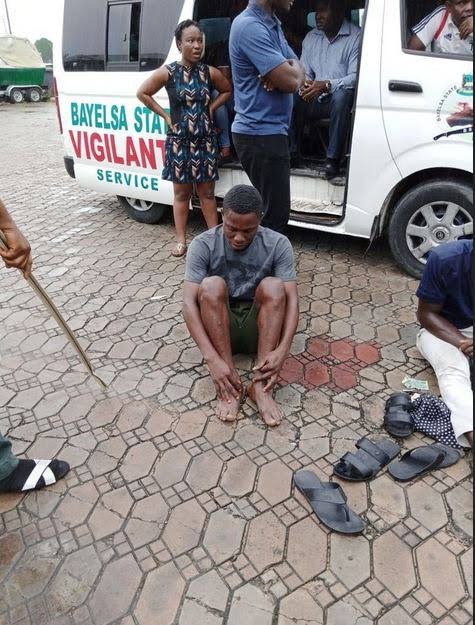 According to a report published by the Nigerian Tribune Online Yesterday, a 34-year-old man from Ughelli North in Delta State, whose name was given as Okpegboro Avwerosuo, was detained by officials from the Bayelsa State Police Command after reportedly murdering his roommate.

Many people were shocked by the tragic incident that occurred in Sagbama Town, Sagbama Local Government Area, Bayelsa State, because they couldn't believe the culprit could do such a thing to his friend.

According to evidence provided by a neighbor who spoke on the condition of anonymity, the suspect persuaded the victim to come to Sagbama and join the motorcycle industry, which is thriving in the area due to the presence of Jasper Adaka Boro College of Education (IJBCOE).

It was revealed that the victim had only been in town for two weeks when Okpegboro beat him in the head with a pestle in the middle of the night, breaking his skull.

The anonymous neighbour also revealed that after killing his friend, the suspect dissected his body, removed the body parts he required, and disposed of the rest in a sack, as a suspicious neighbor confronted him in the afternoon and inquired about his friend because the deceased did play with everyone in the compound.

During the confrontation, the suspect said that his friend had returned to Delta State for an urgent mission. But, dissatisfied with his response, the neighbor pulled his room door open and discovered blood marks on his wall and floor, prompting him to call 911.

He admitted to killing his comrade and selling his body parts to a preacher in Port Harcourt, Rivers State's capital, under interrogation after being handed up to vigilantes patrolling the community.