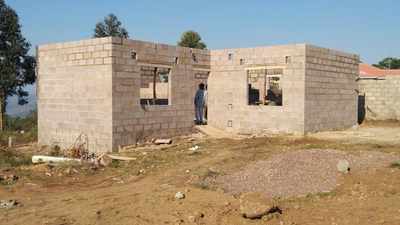 A MAN whose house was demolished after he was roofed off is angry because he allegedly built it illegally on eThekwini Municipality land.

Lucane Langa (46) of Ntuzuma, G, had his house demolished on Tuesday in the area of ​​Ntathakusa near Tafuleni, Inanda, on the land he allegedly bought from a foreman in 2018.

A house built in Ntathakusa, near Tafuleni, Inanda, was reportedly demolished by neighbors when they received a phone call from neighbors informing them that their house, which they had to install doors and windows on the same day, had been demolished, with his wife and six children.

He said he could not believe his eyes when he saw municipal workers dismantling it with tractors guarded by the council's police and the SAPS.

“What hurt me most was seeing my children looking at a picture of their home destroyed, which meant that they would still be living with their grandmother. It is about R120 000 that I spent buying property and building materials, paying someone who could build it, and then paying him all the money, ”said Langa.

Langa said the money he spent on building the four-room house had been saved since he was self-employed, transporting sand to build houses with a bakkie he rented.

He says he had saved some of the building money while he was working.

He said he and his neighbors bought land from the chief, Robinson Shangase, on land he had been told belonged to Qadi chief Mqoqi Ngcobo.

Has the demolition of Langa's house frightened people who say they do not know what the future holds for them?

It is alleged that in 2019, the municipality erected a sign informing the public that their land could no longer be built. The occupants were reportedly given house numbers and told they would pay rates.

The council, it is said, told the people that the land was reserved for gardens. Langa's house is not the only one demolished as it is said that there is another that has no roof, which has been built and demolished.

They say that someone is building a two-story house in the area and they do not know what will happen to it.

Shangase hailed the alleged acts of brutality used by the municipality to demolish houses on King Ngcobo's land.

He said he would go to Ndabezitha to present the matter and then call all the other chiefs to discuss the action they would take.

“This is Qadi land, no one has the authority to do anything on it except the king. There is a royal burial ground that the municipality claims to own. If the king hears about this demolition, there will be a terrible disgrace. The municipality should stop what you are doing, ”warned Shangase.

Mayisela said in a written statement about the land, it appeared to belong to the municipality.

“The issue of occupiers of municipal land is still a problem. We are doing everything we can to prevent this situation through legal frameworks. The council has not demolished people who built their houses in the right place in a legal way, ”said Mayisela.

He said this was a caring council that built houses for those who had never been homeless or living in slums.

In Photo| Love Is Beautiful, a Couple Caused a Stir On Social Media With Their Beautiful Photo.

Watch: Teacher criticized after he allowed a school child to dance inappropriately in class

'See 7 Signs A Woman Shows, If She Doesn’t Want A Relationship With You