Remember The Woman Who Was Born With Four Legs and Two Uteruses, Here Is How She Looks Now

By Yawa_World_Entertainment (self media writer) | 29 days ago

The Woman Who Was Born With Four Legs and Two Uteruses 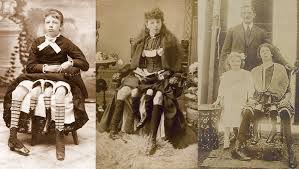 It took the entire world by surprise when Josephine Myrtle Corbin was born since she was born with four legs and two sets of reproductive organs, unlike any other child. Her second set of legs appeared between her own legs, and they were responsible for the development of a fully functional female reproductive system.

What happened was that she was born with a dipygus twin, which is a rare condition. One pair of legs belonged to her, and the other pair belonged to her diptychs twin, who never developed fully in the first place. It was impossible for her to walk with her sister's tiny legs because they were not strong enough and only had three toes on each foot.

Dipygus is a severe birth abnormality in which the body axis divides left and right about halfway down the torso, with the posterior end (pelvis and legs) being duplicated on both sides. In layman's terms, she was born with two separate pelvises that were next to each other from the waist down as a result of a split in her body's axis that occurred during development.

She became a sideshow performer as a result of her extraordinary appearances, and her father would charge inquisitive people money to take a closer look at his four-legged daughter. She began to travel over the country, performing in various places and earning a substantial amount of money.

To everyone's astonishment, she was able to marry a doctor when she was just 19 years old, and she was able to have five children with him. The fact that she was born with two pelvises allowed her to have four children, three of whom were born on her right uterus and another two on her left.

Unfortunately, she grew unwell as a result of a streptococcal skin infection, and she passed away shortly thereafter. Following her death, a number of entertainers and doctors approached her family and offered them money in return for her remains, but her family rejected. As a result, her family was had to keep watch over her grave for several days while the cement dried in order to prevent grave thieves from removing her body.

Because of her widespread popularity in the circus industry, many performers fabricated their shows by displaying fictitious four-legged women. A great number of replicas of Josephine, who pretended to be four legged, appeared after her death and continued to draw large audiences.

Because of advances in medical technology, Josephine's issue can now be surgically repaired after birth.