Shop owner catches a thief trapped while trying to steal from her shop.

By Best_deals (self media writer) | 6 months ago

A thief is caught by a shop owner while attempting to steal from her store-shop (Video).

Luck has ran out on a teenage robber after he was caught redhanded stealing from a shop.

In this particular instance, the young man was caught and chain by the iron guard door of the business while attempting to slip out of the shop.

It was assumed that the shop's owner had left the premises a considerable distance away because she had just locked the metal protector and left the main door unlocked.

The thief, who appeared to have been keeping an eye on the shop owner's movements, recognized an opening and decided to steal something from the shop as soon as he can.

At first, he was able to squeeze through a narrow space created by the iron guard and inside the shop, where he began his work. Unfortunately for him, he was apprehended and escorted out of the store by the owner.

The thief silently agreed, and when he attempted to sneak away using the same route he had taken previously, he was caught by the iron protector, which can be seen below: 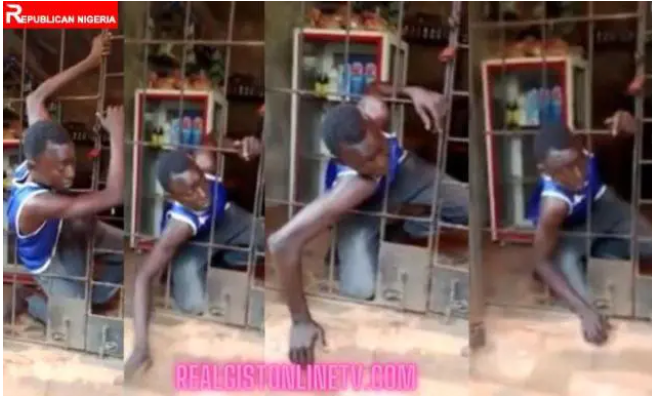 As he fought to get out of the shop, his head could be seen from the outside. A voice could be heard claiming that this is not the first time he has engaged in the act and that karma has now chosen to catch up with him on his previous actions.

When the small lad eventually ventured outside, those men promptly snatched him from beneath his garments and removed his shirt.

Please don't forget to follow me for more reliable updates.

Another Nigerian Drug dealer arrested this afternoon in Gauteng, Look what alse the police found

Here Is Why Crime Is Getting Out of Hand In South Africa.

'This Is What The Police Recovered From 4 Zimbabwean Suspects

Here Is Everything You Need To Know Regarding The Marikana Crisis.

Residents Insist They Will Keep On Hunting Zamas.