By Solly_bombe (self media writer) | 3 months ago

According to authorities, a shooter opened fire from a sniper's nest in an apartment building near an upscale prep school in the nation's capital on Friday, wounding four people before dying himself as police closed in. Raymond Spencer, 23, of Fairfax, Virginia, was originally apprehended by police after a video he posted on social media purported to show shots being fired from the vantage point of an upper-floor window, with the misspelled description "Shool shooting!" During a late-night press conference, Washington Metropolitan Police Chief Robert Contee said the video "looks very much to be authentic," but it was unclear if it was aired live or released after it was recorded. 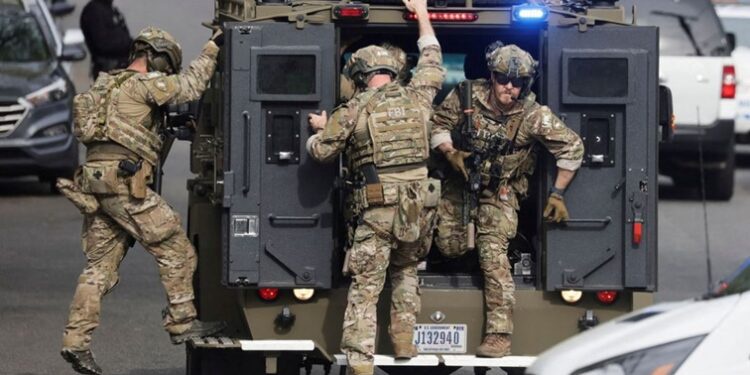 Hours before, police had released an alert with photos of Spencer, stating that he was a "person of interest" in their investigation. Just as classes were about to end for the day, shooting and manhunt halted the posh Van Ness area of northwest Washington, which is home to the Edmund Burke School, a private college preparatory institution. The school and other nearby houses were put on lockdown, with terrified pupils messaging worried parents as police conducted a door-to-door hunt for the perpetrator. With the help of eyewitness testimonies, police were able to track down the gunman on the fifth level of a "certain apartment building" and "breached the site where the suspect took his own life," according to Contee.

According to the chief, the apartment was set up in a "sniper-type setup" with a tripod weapons mount, and police discovered more than a half-dozen weapons, including many rifles and massive amounts of ammunition.

"His goal was to murder and hurt members of our community," Contee said, adding that authorities had yet to figure out why.

The four victims were shot at random while "going about their business... on the streets of the District of Columbia," he told reporters.

The gunfire sent a 54-year-old man and a woman in her mid-30s with severe wounds, as well as a 12-year-old child hurt in the arm, to nearby hospitals, according to Assistant Police Chief Stuart Emerman.