RIP Mnqobi (3) And Lwandile (5), They Didn't Deserved To Die So Painful.

A COMMUNITY in Makhuzeni, Highflats is still shocked after three children were burnt to death when a roundhouse caught fire on Tuesday.

The children who died in the massacre were Lwandile Mkhize (5), Mnqobi Mkhize (3) and Thandolwethu Sithole (4). Family spokesman Zilonze Mkhize said the children were playing on the farm where they lived when they entered a roundabout next to them. The children's mother, Khonzeni Mkhize, said she heard the children crying. He hurried to the house and found smoke coming from inside. Zilonze said the children died before getting help. He said the mother was still in pain. Local councilor Nicholas Mdunge confirmed the accident. 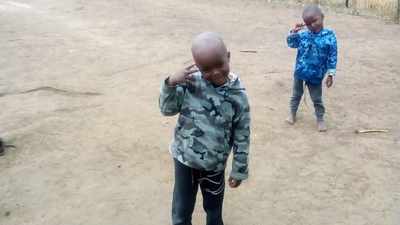 "We have never seen a tragedy like this. I will try to talk to a social worker for counseling families," Mdunge said.

He urged families to ensure that children remained safe in their playground and that a family member could observe them.

"It is alleged that on September 21, 2021 at around 6pm in a house with three children between the ages of three and five there was a fire at Bethal Farm. The victims were identified as dead. The cause of the incident is still being investigated," said Captain Gwala.

The children are expected to be buried in the local cemetery in Matatane Mission.

Exposed Celebrities Who Were Ugly Before Fame. No 3 will amaze you

Did you know Kea from The Queen and her husband are both sangomas? Mzansi in disbelief