DURBAN - Port Shepstone police are examining instances of chargeable crime after five individuals were killed when four vehicles collided with one another on the N2 in KwaZulu-Natal on Sunday evening. 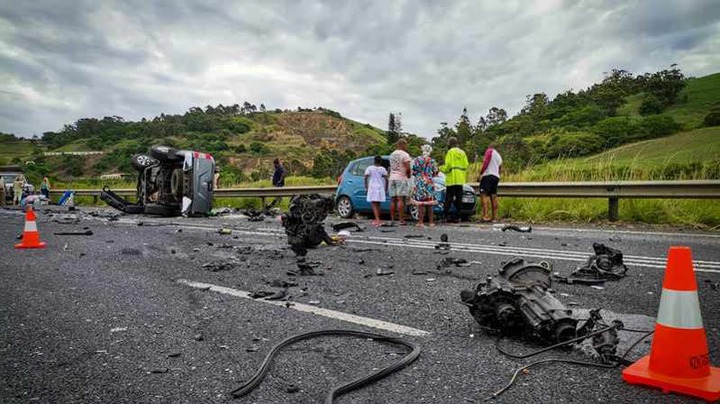 Police representative Colonel Thembeka Mbele said it was asserted that on Sunday at around 4.30 pm, four vehicles were engaged in an accident along the N2 close to Umtentweni Toll Plaza.

"Five individuals somewhere in the range of 40 and 50-years of age passed on at the scene," Mbele said.

"Seven harmed people were taken to a nearby medical clinic."

Mbele said it was asserted that one of the vehicles attempted to overwhelm and slammed into an approaching vehicle, making two different vehicles impact and one more to upset.

Ncalane said the office would examine the reason for the accident, their groups had been to the scene, and they have begun the fundamental examination, and they trust they will before long settle the report.

"We are additionally investigating the conceivable outcomes of really looking at every one of the vehicles, checking the drivers in light of the fact that there are solid charges that one of the drivers may have been affected by liquor during the mishap. In any case, that is unconfirmed right now, yet it will be essential for the examination," Ncalane said.

He said the street was shut down, and traffic was redirected to the R102.

KZPA said when they showed up at the scene, they observed that four vehicles had been involved.

The patients were treated at the scene prior to being shipped to the emergency clinic for additional treatment.

"Tragically, five patients had supported lethal wounds and capitulated to their wounds before crisis administrations showed up," KZPA said.

Police probe deadly 4 vehicle crash that killed 5 on the N2 in KZN (msn.com)