There is a pictures of a deceased Rosemary Mkhungo which is currently circulating in social media page. Apparently the coffin was seen in street holding by woman. Mzansi has what concave happen hat the coffin has to be taken to the street. 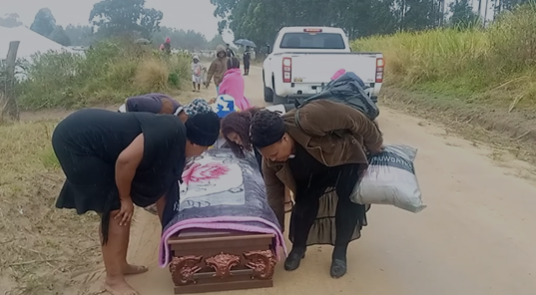 A family is left devastated after the Induna refused the family of Rosemary Mkhungo to bury their love one in a cementry. According to the source the family was forced to take the coffin back.

Many people came to the funeral in numbers to pay their last respect to Rosemary but they end up not attending the funeral because of the chaos caused by the local Induna. According to the source the local Induna are saying that the amity have no right to bury Rosemary in his land.

A family were rescued by the municipality the family after they were refused to bury their loved one in the land where the Induna does not want them. Apparently the induna names Siphiwe Maluleka has disrupted the funeral after he came with his group to disturbed the service.

It was heartbreaking to see as the sister of the deceased explained how they mistreated her late sister inside the coffin. Apparently the coffin was taken out of the hole after they asked the family if they did get the permission to bury Rosemary in the land.

Apparently according to the sister who explained the reason why the Induna refused to bury Rosemary in his land is because she died without paying the rule amount of a stand that she was living at. Apparently she bought a stand of R11,000 and she was left the remaining balance of R2,430. Apparently the amount was suppose to go hand in hand, a case of beer, cold drinks and a bottle of vodka to ve use for traditional ritual.

Mzansi have shown their reactions after hearing the news and the have been praying to Rosemary to be buried.

Benefits Of Drinking Milk Before Bed