By KoketsoZA (self media writer) | 9 months ago

A couple was found shot to death in a Ford mustang. Its believed that the mustang belonged to the boyfriend. The suspect was later found at his residence having committed suicide with the same gun. 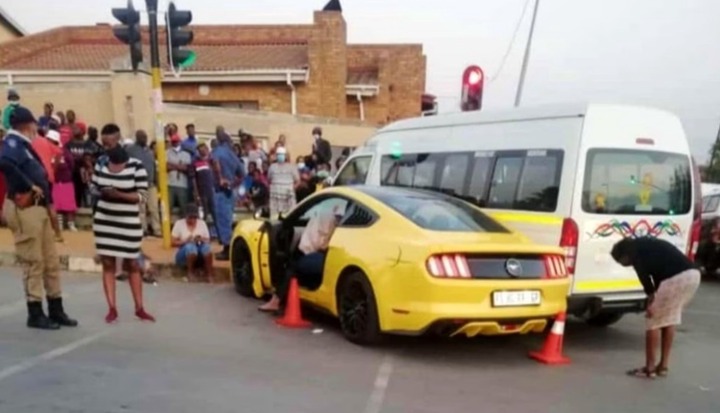 The woman was a police reservist working at the Diepkloof police station in Soweto. Her male companion, the owner of the Ford Mustang, was believed to have been a forex trader while the gunman was a taxi owner suspected to have been the woman's ex-lover.

A video that was taken at the scene following the incident shows a group of people surrounding the car while two bloodied bodies are slumped inside.

Nearby was a minibus taxi that was hit when the driver of the car lost control of the vehicle.

A witness told reporters that the taxi driver was angry that the woman had dumped him and gotten herself a new boyfriend.

"He shot at them as they were driving in Soweto. After shooting at their car, the driver lost control and hit a minibus taxi.

The shooter then proceeded to his parents' house in Orlando and killed himself," said the source.

The couple was shot along Baragwanath Road in Soweto. Said the Police spokesperson Colonel Athlenda Mathe.

She then went on to inform us that the female reservist constable, who was attached to the Diepkloof Visible Policing Unit, and a man were driving along the road when shots were fired at them.

The shooter then drove off and later killed himself.

"He was found to have shot himself at his place of residence in Orlando East," Mathe said.

15 empty cartridges were found at the scene.

Mathe said police will investigate the circumstances surrounding the shooting.