A Girl says she is not sleeping at night, after she saw her two friends died Infront Of her shouting 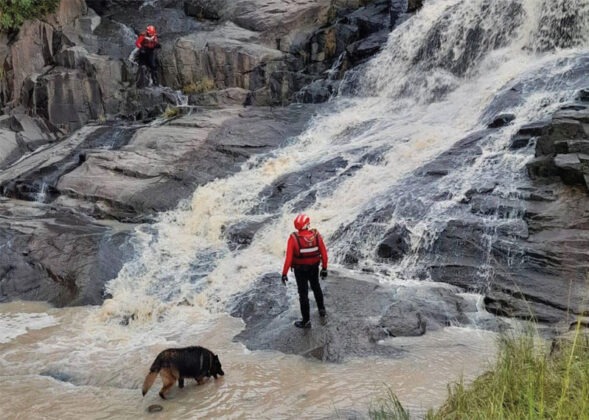 DRIVERS are still searching for the bodies of Pholisani Sithole (14) of Siphahleni, and Mbali Mthembu (15), of KwaZashuke who were swept away byt The river two weeks ago.

She wakes up in a daze when she describes what she saw a little girl from Bulwer, when two of her friends, who were going out with her , walked down the river looking helpless. The girl said the river was flooded, with no help to save her except to call out to the adults. Thabisile Majola (15) (who witnessed the incident), said she could not sleep at night with the pain she felt as the rivers flowed away with Pholisani Sithole (14) of Siphahleni and Mbali Mthembu (15) of KwaZashuke at 2pm.

SHe said what bothered her most at night was the ringing in her ears of their cries and crying for help as they drowned in a flooded river. The Sun on Monday 4th reported a typhoon that had hit parts of the Bulwer area under Dr Nkosazana Dlamini Zuma Municipality, in Harry Gwala district, leaving more than 300 homes destroyed.

Asemahle Ntuli (5) from Bethlehem died when the roof collapsed on the house where she was staying with members of her family. Speaking to LANGA last week, Thabisile, who was on her way to receive counseling from the Bulwer Department of Social Development, and some of her friends who were with her during the departure of Pololisani and Mbali, said the image of what she saw of her friends was unforgettable.

“We were coming out of a horse-moving event in Mphithini village, and on our way back, we found the Siphahleni River full of crossings. I could not cross because my home was across the river. “Polisa and Mbali, they said they would cross because the river was not very full. I saw them being swept away by the water and shouting for help, it was difficult for me to get into the water because there were so many. “I ran home and told my mother about their departure, and people were called and searched for her. "Since this happened,

I have not slept well at night, I am still scared because the picture is back to normal," said Thabisile with tears in her eyes.

Over the weekend ILANGA reported that a member of the public was crossing the Mkhomazi River to fetch cattle from the veld, which came across the decomposing body of a woman on the riverbank. Sewes to cities in the District of the Numba Valley, police took us to pass on to evaluate the girls. Mr Vusi Mthembu, ward 12 councilor Dr Nkosazane Dlamini Zuma of the municipality, confirmed the discovery of a woman's body in the Mkhomazi River, which was seized by Boston police and transferred to a state mortuary in Howick. “On Monday we went with the girls' families to the state mortuary in Howick. We have seen the body or it is difficult to identify it because it is damaged. "Even for the girls' families it has been difficult to determine who owns them,.

We Persuaded Zikalala To Stay As Premier Till 2024, But He Resigned Because Of Ministerial Position”

Ramaphosa was nearly arrested yesterday because of this. Read for more.

The ANC faces another challenge is this a bad sign?