Taxi men gunned down in Limpompo after funeral

By Kgomotso02 (self media writer) | 2 months ago 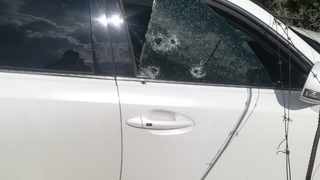 Rustenburg - Two taxi bosses returning from a funeral were gunned down in Limpompo, the provincial police said.

Spokesperson Brigadier Motlafela Mojapelo said their bullet-riddled bodies were found inside an idling sedan at the Pankop-Pienaarsrivier T-junction, on Saturday afternoon.

“It is believed the two victims attended a funeral at Phake Village and as they were driving back and approaching the T-junction, their vehicle was apparently shot at many times by unknown suspects. The victim’s vehicle went through the intersection and stopped in nearby bushes,” he said.

”It is not clear at this stage how many suspects were involved and whether or not they were on foot or driving a vehicle.”

Mojapelo said the two were reportedly the chairperson and secretary of Simunye Taxi Association, they were identified as Charles Sibanda and Julius Morifi, 50.

”The motive for the attack is not known at this stage, but taxi violence cannot be ruled out. Anyone with informs is requested to call Lieutenant-Colonel Richard Boshomane on 079 894 5501, MySAPSApp or their nearest police station,” he said.

In North West, police said a 22-year-old woman arrested after she allegedly stabbed her 42-year-old cousin to death on Saturday, in Amalia near Schweizer-Reneke.

”According to information, the victim was visiting his mother’s house and found the suspect eating. The allegedly had an argument and the suspect took out a knife and threatened to stab the victim, but the latter’s girlfriend managed to intervene and grabbed the knife from the suspect.

”The victim and suspect were then left alone. However, the victim arrived a while later at his house, which is three houses away from her mother’s residence and told his girlfriend that the suspect who is his cousin, had stabbed in his upper-body,” said spokesperson Lieutenant-Colonel Amanda Funani.

”An ambulance was called, but the victim died before he could be transported to a nearby hospital. Police were summoned and the suspect was arrested and charged with murder. The motive for the murder is still unknown, and investigations into the matter continues.”

The woman was expected to appear in the Schweitzer-Reneke Magistrate’s Court on Monday.

Content created and supplied by: Kgomotso02 (via Opera News )

The 42-year-old Woman Escaped Death After Doing This To The Moving Vehicle. Details.

DJ Lamiez Holeworthy and Khuli Chana are spotted in Namibia