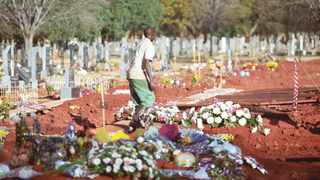 Family members whose loved ones who are buried at Pietermaritzburg's Azalea Cemetery are concerned that squatters' invasion of the cemetery land, which has resulted in the construction of houses on the graves, will result in the cemetery's destruction.

The land invasion, according to the family members, was an insult to their loved ones who were buried there.

Over the past 30 years, residents from nearby communities such as Imbali, Ashdown, and Willowfontein have been burying their loved ones in the cemetery.

Bernard Mtolo, who claimed to have buried his wife in the cemetery, was surprised to find a house next to her grave.

"It's a disturbing sight to see that house surrounded by graves." He stated, "I have no doubt that they had to move some graves in order to build that house because it is built in the middle of the grave site."

He called the act of erecting houses in a cemetery "shocking and inhumane," noting that the perpetrators were not from the neighborhood.

"How are people able to do this?" "I feel sorry for people who come to the cemetery to pay their respects to their loved ones only to discover a house in their grave," Mtolo said.

He claimed that while at least one house had been demolished, people continued to construct structures. He urged the city government to step in.

Sikhanyiso Zuma, whose relatives are buried at the cemetery, expressed dissatisfaction, saying the community might wake up one day to find all of their graves gone.

"My father's grave is now next to someone else's home." They clear out graves that do not have tombstones and construct their homes. For the time being, tombstones are the safest graves," he said.

He claimed that people were selling land illegally and that they had gone to the appropriate departments to report it, but that nothing had been done to remove the land invaders.

"What's going on there is a disgrace because some people have graves of people they don't know beneath their houses."

"I'm also curious as to how these people sleep at night, knowing full well that they're building on top of graves?" Zuma enquired.

Graves, he said, are sacred, and many people pay their respects to their loved ones during rituals.

"How will people be able to honor their loved ones and perform rituals if houses are built on top of graves?" He expressed his sadness by saying, "This is really sad."

Thabiso Molefe, a former ward councillor, said the land invasion has been going on for a while.

"The municipality owns the land." What's more shocking is that land invaders want to build their homes in cemeteries," he explained.

Msunduzi municipal spokesperson Thobeka Mafumbatha said the municipality was aware of the situation and was working to get a court order to have the invaders removed.

"We are aware of the situation, and the anti-land invasion unit has and will continue to demolish (invaders' homes)." "We urge our communities to refrain from illegally grabbing land because it is a crime," she said.