A shooting at uMlazi, south of Durban, killed one security officer and critically injured another. According to Emer-G-Med spokeswoman Kyle van Reenen, paramedics found the two males in a Datsun Go. 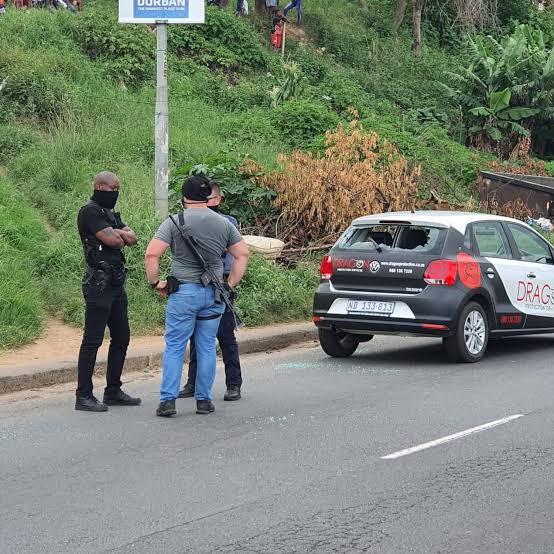 “The driver was found in severe condition and a Netcare911 aeromedical helicopter was requested to take him to a specialised center for decisive care,” Van Reenen added.

In uMlazi B Section, two security guards were escorting a courier van when they were ambushed by two armed guys driving another car. They shot both security guards, one of whom died at the scene. “The other was shot in the head and transported to hospital,” Mbele added. “The victims also lost their guns.”

Security guards were servicing an ATM at W Section in uMlazi when they were reportedly attacked by a group of armed thieves driving in two cars.

“The criminals reportedly began firing at the cash truck, injuring one security guard. “We took him to the hospital,” Netshiunda stated.

“The suspects robbed the guards of an undisclosed sum of money and two guns. They were later found abandoned at G Section in uMlazi.”

Netshiunda claimed cases of robbery and attempted murder were opened.

Polo Driver Gets Shamed For Doing This To His Car

Sbahle Mpisane's Body Gets Mzansi Talking, See What She Was Wearing

Watch: Kidnapper's Vehicle Overturned And The Victims Escaped With No Injuries

JUST IN| Woman loses R10m Ferrari key during Pretoria, and this is how much she offered for the keys

"Me going home after being robbed at Mtn taxi rank." A lady says, leaving many in stitches