Hundreds of people were evacuated to safety on Sunday as torrential rains pounded South Africa's coastal region of KwaZulu-Natal, flooding roads and homes and causing property damage, according to a government official.

The administration is currently working to repair damaged infrastructure and re-house those who were displaced by the country's worst floods in recorded history earlier this month. The April floods killed 448 people and left 88 individuals missing, displaced over 6,800 people, and destroyed infrastructure valued more than R25 billion.

The South African Weather Service had sent early warnings to the province, forecasting more inconvenient rain on Saturday in a number of cities, including Durban, which had been severely inundated.

"So far, the most significant impact is predicted in the coastal and north-eastern areas of KwaZulu-Natal," said Sipho Hlomuka, a member of the executive council for Cooperative Government and Traditional Affairs. 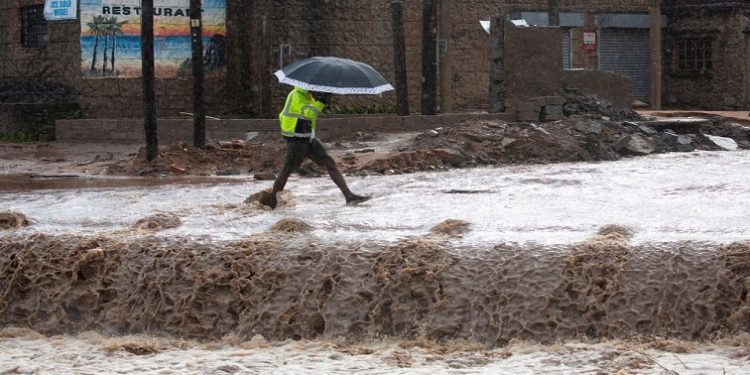 He said over 250 people had been moved to various institutions from care centers in Tongaat and Tehuise in Durban, including retirement communities. Due to the collapse of an informal home, just one family was forced to flee.

"The torrential rains have caused flooding of highways, human settlements, and property damage." We hear that certain locations are inaccessible and have turned into islands at this point," he added, adding that they had not yet received a complete assessment on the impact of the recent severe rains.

The rain continued to pour in several regions of KwaZulu-Natal on Sunday, according to the South African Weather Service, with the alert level remaining at 10, the highest and most severe level.

Scientists fear the southern coast of Africa is growing increasingly prone to strong storms and floods as the Indian Ocean warms due to human emissions of heat-trapping chemicals. In the future decades, they predict the tendency to increase drastically.

While the impact of torrential rains that triggered flooding overnight in KwaZulu-Natal is not on the same magnitude as last month's terrible floods, climate change specialist professor Tafadzwa Mabhaudhi believes that many people are vulnerable as a result of the situation.

"Climate change is expected to increase the frequency and intensity of weather extremes, and of course, we're seeing these floods that are happening again this weekend, and while the effect hasn't been as severe as what we witnessed, the risk profile is what has really elevated this problem." As a result, the South African Weather Service has issued a level 10 warning."

The Youngest One Was 14 Years Old, This Is What You Need To Know About The Teenagers Who Sadly Died

Is Mzansi preparing for another National Shutdown ? This is what's trending on social media