Robbers gun down crewmen in Sediberg cash in transit heist

Being part of the crewmen in cash in transit vehicles is now seen as taking a major risk in life.

One analyst upon learning the events that unfolded today had to conclude that the job is a high risk low rewards type of job.

On Wednesday the 3rd of March 2021, a message was shared by Crime Air Network which left many in shock. This was because of the aggravated manner in which a cash in transit robbery was executed by armed perpetrators.

The perpetrators made sure that they completely overrun the crewmen and they did not even consider that the guards are also part of certain families who look up to them as breadwinners.

According to reports, a team guards was carrying out their routine duties of delivering and collecting cash in Sediberg in the Gauteng Province.

They were accosted by armed perpetrators who attacked them when they were in the Zone 7 in Sebokeng.

A speeding vehicle came and rammed in the truck when it was in Sebe Street. This led to the cash van getting derailed from its route and armed robbers pounced on the crewmen. They fired several shots towards the van in the process shooting some of the guards.

Cash was quickly loaded in getaway vehicle before they applied explosives on the money truck and set it on fire. The perpetrators then jumped into two getaway vehicles which are namely a blue BMW sedan and a silver Audi and fled from the scene.

Calls were then made to the police and other security teams informing them of the events that had unfolded.

The members arrived on the scene a few minutes later but the suspects had already fled. An investigation is being carried out by the police as they seek to hunt down the suspects who carried out the robbery.

Paramedics were also summoned to the scene and carried out an assessment on the crewmen. During the assessment it was discovered that two of the guards had sustained gunshot wounds and they were treated on the scene.

Once they had got stabilised, they were taken to nearby hospitals where they are set to receive further care and treatment. 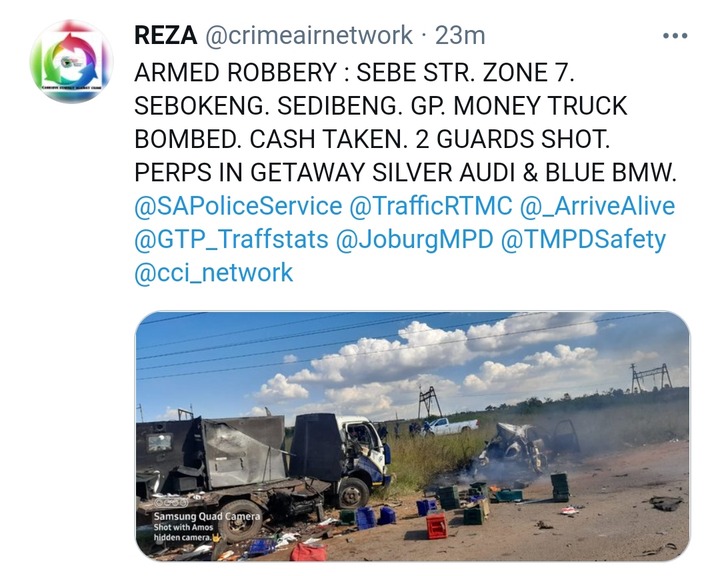 Cash in transit robberies are being reported in South Africa daily and calls are being constantly made for an improvement in the security for cash vans.

Members of the public feel that more needs to be done by the police to address a situation that has been troubling the nation for a while now.

A Pastor Drowned While Praying For Church Members

Heavily Armed Suspects In A Merc Rammed And Bombed A Cash Van, They Fled With All The Cash.

After robbing fidelity, things went wrong. See what they were caught doing in the safe house. Pics

In Limpopo this ends in tears for two Cops. Check here