Molefe Rakosa was driving and minding his business when his blue VW Polo Vivo; was suddenly bumped from behind. He got out to confront the driver only to find the driver drunk. 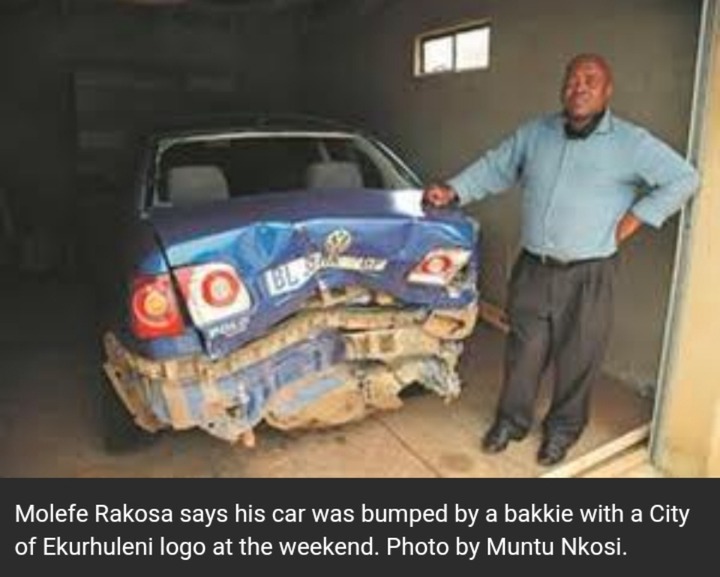 The drunken driver was driving a Nissan NP300 bakkie; with a City of Ekurhuleni logo. While he was busy talking to the drunken driver; another driver bumped his car once more.

When he went to confront the second driver; the first driver drove off. Rakosa managed to take the car's registration numbers before he disappeared.

He then confiscated the keys from the other drunken driver who hit his car for the second time; and called Ekurhuleni call centre; where he said he was sent from pillar to post.

The onlookers supported Rakosa during his ordeal. When the Ekurhuleni metro police came; they arrested the second drunken driver.

They helped him to write a statement with the police regarding the first accident with the City of Ekurhuleni drunken driver of a vehicle who drove off.

Rakosa wants the first driver to pay for the damage to his car and said he will not back down or be discouraged by the cold reception he got from the City of Ekurhuleni.

Rakosa blamed President Cyril Ramaphosa for the removal of the alchohol ban.

Sergeant Harry Manaka confirmed that a case involving a drunken driving accident was opened at the Duduza Police Station.

The spokesperson for the Ekurhuleni Metro police; Kobeli Mokheseng; said Rakosa must speak to the Metro offices; station commander; who will follow up the case.