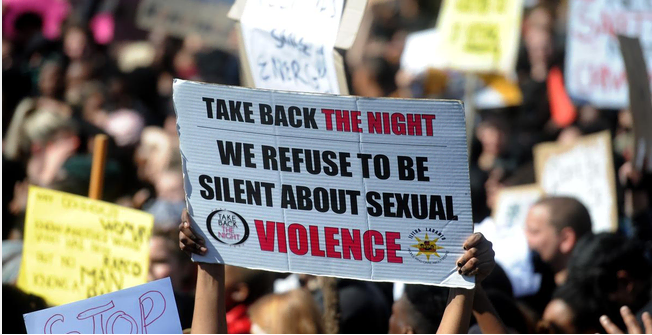 Durban: Following the recent release of SAPS crime figures, campaigners claim that crimes against women and children are on the rise.

The figures were revealed just days before South Africa marks the 30th anniversary of the 16 Days of Activism for No Violence Against Women and Children campaign, which takes place from November 25 to December 10.

According to Kerryn Rehse, MOSAIC's advocacy, policy, and research officer, "the rate of domestic violence, sexual violence, and other types of GBV remains persistently high." According to research data, one in every two women would suffer domestic abuse from a current or former intimate partner over their lives."

Durban: Campaigners believe that crimes against women and children are on the rise, after the recent publication of SAPS crime numbers.

The data were released only days before South Africa commemorates the 30th anniversary of the 16 Days of Activism for No Violence Against Women and Children campaign, which runs from November 25 to December 10.

"The rate of domestic violence, sexual violence, and other sorts of GBV is continuously high," says Kerryn Rehse, MOSAIC's advocacy, policy, and research officer. According to statistics, one in every two women may experience domestic violence from a current or past intimate partner at some point in their life."

Lubna Nadvi, a board member of the Advice Desk for the Abused, believes it is inappropriate to question why women continue in violent situations.

"The question should be, 'Why aren't there more choices accessible to women and men who are victims of domestic violence or GBV and wish to leave a relationship?'""

She believes that women and girls should be educated not to accept any type of abuse or violence.

"A national dialogue must take place at all levels of society. It cannot simply occur between government officials and some GBV-related NGOs.

"It must occur between parents and children, as well as other family members, instructors and students, friends, coworkers, and people who do not know each other." If there is to be true change, society as a whole must take the matter seriously and act."

According to Adeshni Naicker, head of Childline KZN, South Africa has one of the worst rates of child maltreatment.

She described the abuse as neglect, sexual abuse, exploitation, emotional abuse, and malnutrition. According to Naicker, they receive about 3000 calls every week, with 99 percent of them relating to some form of abuse or GBV.

According to Javu Baloyi, the spokeswoman for the Commission for Gender Equality (CGE), there must be a strong political resolve to combat GBV. According to him, the CGE receives almost 20 GBV-related cases every week, roughly ten of which are relevant to the commission's mandate. Those that were ineligible were forwarded to the appropriate institutions.

"Resources must be invested in this struggle, and we must go from talk to action," Baloyi added.

"Civil society and government must collaborate, and the corporate sector must play an important role. We require a permanent GBV council structure from the government that is well-resourced in terms of both personnel resources and financial resources."

Mhlabunzima Memela, the Department of Social Development's spokeswoman, stated: "GBV has been labeled the second pandemic after Covid-19, and as such, awareness must be increased 24 hours a day, 365 days a year...

"There are already 23 shelters and 29 White Door Centres of Hope around the province to assist victims of GBV and femicide." In the eThekwini and uMgungundlovu districts, the department has created two shelters for males who had been victims of trafficking and other types of abuse."

He stated that they had increased their psycho-social services at eight Thuthuzela Care Centres located in six districts, including Phoenix, Chatsworth, and Umlazi in eThekwini, and that 183 social workers had been engaged to provide psycho-social support services. Furthermore, Memela stated that there were 92 victim-friendly rooms at police stations.

Shelters, according to Analisa Naidoo, a social worker at the Sahara Shelter for abused women and children in Phoenix, provided people with refuge during a crisis. They also provided a warm and supportive setting for the abused person's rehabilitation process, according to her.

According to Naidoo, they take in roughly seven women every month, some of whom are moms.

"Women frequently seek help when the violence is serious, such as when they receive injuries or when their children are directly engaged or exposed to the abuse." We need to improve skills so that some of the ladies can make a living.

"We need protection orders to be finalized as soon as possible, and the police to be more proactive when asked for assistance." To see a difference, all sectors must collaborate."

The Phoenix Child Welfare Society is behind the Sahara shelter.

The Aryan Benevolent Home in Chatsworth has the ABH VJ Kara Family Centre, according to Kish Chetty, marketing manager. She stated that it intended to empower women who had been subjected to physical, mental, or financial abuse.

Chetty stated that they got roughly 20 GBV-related calls every week, although not all of them required shelter assistance. She said that the center also assisted offenders of GBV, allowing the cycle of domestic violence to be broken.