Security guard killed, another in a critical condition after being shot and robbed of their firearms 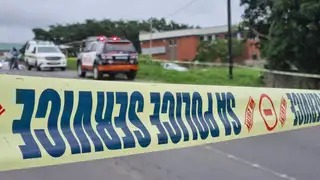 A security officer was killed and another was left in a critical condition and had to be airlifted to hospital after a shooting incident in uMlazi, south of Durban.

Emer G Med spokesperson Kyle van Reenen said their paramedics responded to the scene in B Section to find the two men seated in a Datsun Go.

The driver was found in a critical condition and a call was made for the assistance of the Netcare911 aeromedical helicopter to airlift him through to a specialist facility for the definitive care that he required, Van Reenen said.

The passenger was found to have sustained fatal injuries and was declared dead on arrival of paramedics.

Van Reenen said that the SAPS were at the scene and would be investigating.

It is alleged that today at 1pm, two security guards were escorting a courier vehicle on Yeni Veni Road in uMlazi B Section when they were attacked by two armed males who were driving a vehicle. They shot both security guards, one aged 47 was shot in the neck and stomach and he died at the scene. The other one was shot in the head and was taken to hospital for medical attention, Mbele said

Content created and supplied by: Lento123 (via Opera News )